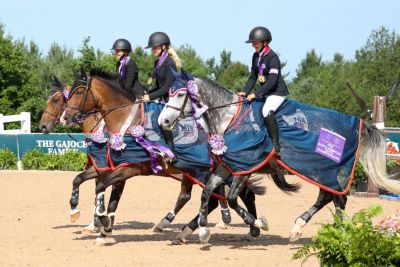 The FEI North American Youth Championships (NAYC) 2021, formerly the North American Junior and Young Rider Championships, continues to evolve. After a year hiatus, the prestigious event returned with a new location in Traverse City, MI as well as a new category in the Pre-Junior Championship. But the abundance of talent remained the same.

The USA’s Zone 4 — made up of riders hailing from the states of Alabama, Florida, Georgia, Mississippi, Tennessee, and South Carolina — dominated jumping competition, claiming three of the four team Championships, while the American west coast shined brightest in dressage.

The Children’s category of Jumping made its debut when this event was last held in 2019, and the division has grown, with Mexico sending forward two teams for the first time. Mexico North and Mexico South would take up two-thirds of the team podium, but both would fall just short of USA’s Zone 8/9/10.

“It was kind of a lot of pressure, because I didn’t know how I was going to win. After the last jump, I sat up super tall, and everyone started clapping and were all really happy.” — Reagan Tomb (Team USA)

That left Mexico South and Mexico North — both on eight faults — to jump-off for the remaining medals, and Mexico South ultimately earned silver, with Mexico North bronze. However, Mexico would get its turn atop the podium in individual competition, with Jimena Carrillo Watanabe (First Time LS) of Mexico North emerging victorious from another jump-off.

The addition of the Pre-Junior category to jumping competition further enhanced a gradual pipeline of rider progression in the sport in North America. With fences set up to 1.30m, the Pre-Junior division bridges the gap between Children’s (1.25m) and Junior (1.40m) competition.

The USA’s Zone 4 rallied for a come-from-behind victory, with teammates Mia Albelo (Cocominka EST), Caia Watridge (Iselle van Orshof), Trinity Beitler (Coconut), and Lawson Whitaker (Brownie and Cream) each producing at least one clear round for the team. The squad completed the final round of team competition without a single fault, which would comfortably propel them ahead of Mexico North and USA Zone 10, despite Mexico North solidly holding an early lead.

“All of them contributed to the team score, and it was very tight going into the last round today, and they pulled it out with three clears,” said Zone 4 Chef d’Equipe Kim Land. “It was really a huge team effort, and we’re so excited for them and the future of the sport because of them.”

“I’m very blessed and very honored to have this gold medal and to be on this team,” Whitaker added. “It’s really a dream come true.”

“I’m so lucky to have come back today in the top spot,” Albelo said. “Going through those timers, keeping all the rails up was pretty emotional.”

Called the “Zone 4 Dream Team” by Chef d’Equipe Kim Land, Holtgers, Jr. and Rizvi produced critical double-clear efforts for their teammates, which put Zone 4 on a total score of 10.15. Canada jumped onto the podium with the silver medal (20.62), while USA Zone 5/6 earned team bronze (27.48).

“I went last, so I had a lot of pressure on me, but I had faith in him, and he was so good, at every single jump,” Rizvi said of her mount.

Proving the merit of Land’s words, Rizvi and Holtgers, Jr. went on to claim the top two individual medals of the competition. Rizvi and Excellent jumped to their second gold medal, finishing the competition on just 2.46 penalties. Holtgers, Jr. (Elina) took the silver, with Canada’s Lea Rucker (Evita) bronze.

A year hiatus did not change much for Region 4, who rode to a second consecutive title in the Junior team Dressage competition. With just three riders, the Region 4 squad did not have the luxury of a drop score, but it wasn’t needed, with sisters Kylee (Honor) and Lexie (Montagny von der Heide) Kment and Ella Fruchterman nearly five percentage points better than runners-up Region 7. USA Region 3 rounded out the podium.

“I am elated to see these girls up there, because it is the second year in a row that we’ve been atop the podium at NAYC,” said Nancy Gorton, who, alongside Ann Sushko, served as Chef d’Equipe for Region 4. “Region 4 has always been the underdog — we’re the flyover states — but I think that what we’re seeing is the dedication to the sport that’s been passed down over generations.”

The Kment sisters again shared the podium in the NAYC Junior Individual Championship, with Lexie and Kylee finishing first and second, respectively. The sisters were separated by just one percentage point. Kat Fuqua, who competed in both dressage and jumping at NAYC, received the bronze medal.

In her NAYC debut, Lexie Kment rode to a third gold medal by week’s end, topping the Junior Freestyle Championship with a score of 74.775 percent. Julia McDonald (Lehndorff van de Vogelzang) of Region 2 received the silver medal, while Fuqua claimed her third bronze medal of the week aboard her own Dreamgirl.

Zone 4 emphatically capped its week with a third gold medal in Young Rider competition. Erika Jacobson (Everton), Riley Delbecq (Julesraimus de Brisy), Violet Lindemann Barnett (Alanine de Vains), and Ashley Vogel (Bellissimo Z) brought their team from fourth to first with just a single rail and a time fault against them over the course of the two rounds of the team final.

Zone 2 would make it close, and while anchor rider Mimi Gochman (Celina BH) delivered with a double-clear performance, it wasn’t quite enough to overtake the lead. Zone 2 settled for silver, with Canada bronze.

“From the [opening] speed and today, through each round, they just got better and better,” Zone 4 Chef d’Equipe Kim Land said. “They moved up. They were fourth, then they were second, and then they won gold. I’m incredibly proud of them for their accomplishment.”

“Jumping this many rounds is tough on any day, and it’s really important this week,” Gochman said. “I was super thrilled to continue to jump clear throughout the whole week.”

It was much closer for the remaining medals, with less than two percentage points separating silver and bronze. USA Region 2 just edged Region 4, who received the bronze medal.

Simonson was also the individual champion — and the only rider to score above 70 percent in the competition. In the individual final, Simonson also rode to a personal best score of 75.353 percent. The 19-year-old has had the ride on Christina Morgan’s 9-year-old gelding for two years.

“When I was on the podium, I was thinking about the fact that the last time I rode the individual test at a NAYC, I was disqualified,” said Simonson, who trains with U.S. Olympian Adrienne Lyle. “Thinking about that and the fact that I’m here now with a different horse, one that we’ve brought up and shown step by step and I’ve been a part of the whole process — to be able to redeem myself in that individual test was an amazing feeling.”

Simonson’s successful week concluded with an exclamation point, as he rode to one last gold medal in the Young Rider Freestyle Championship. Simonson and Zeaball Diawind continued to bring their scores up, this time receiving a 78.935 percent from the judges — setting a new record for the highest score awarded in the FEI Young Rider Freestyle Test. The judge at B even awarded this pair an 81.375 percent.  Region 1’s Allison Nemeth (Tiko) received the silver medal, finishing less than two-tenths of a percentage point ahead of bronze medallist Tillie Jones (Qi Gong TF) of Region 4.