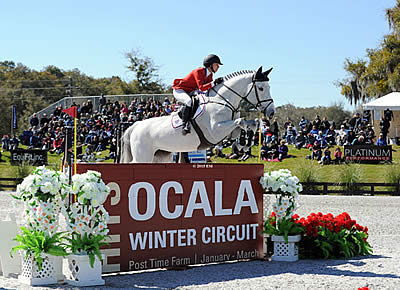 The debut of the internationally acclaimed team event, a qualifier for the FEI Nations Cup™ Finals in Europe, drew an impressive amount of attention, shining a spotlight on the sport of show jumping in the western hemisphere, and fulfilling an integral part of HITS, Inc.’s mission of expanding and improving the sport in North America.

The event in Ocala hosted the only 2015 FEI Nations Cup™ qualifier in the North and Central America and Caribbean division, comprised of Canada, El Salvador, Mexico and the United States. The event paved the way for other North and Central American countries in the division to host FEI Nations Cup™ events on their soil, like the qualifier in Valle de Bravo, Mexico this year.

According to the FEI’s 2015 report, the United States produced a cumulative audience of 3.87 million, which is the total amount of people that witnessed coverage from the Furusiyya FEI Nations Cup™, all qualifiers included, on U.S. specific channels. Out of the 16 FEI Nations Cup™ qualifiers held in 2015 across the world, over half a million viewers in the United States came from the qualifier in Ocala.

The Furusiyya FEI Nations Cup™ Jumping 2015 returned to HITS Ocala in February 2016 for the second time, filling the grandstand and grass berm in Ocala Horse Properties Stadium to capacity with an additional international live stream on FEI TV. The 2016 data is not yet calculated, but with a healthy figure in 2015, the future is looking bright for HITS, Inc. and the spread of these globally high-caliber events across North America.