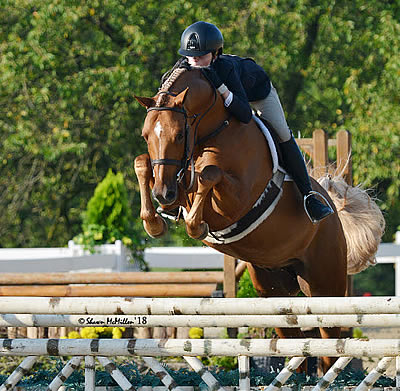 Lexington, Kentucky (August 31, 2018) – A new gold standard set by a golden pony and his rider: the 2018 USEF Pony Finals presented by Collecting Gaits Farm saw the birth of a new superstar partnership and a new era in Pony Hunter competition. Kat Fuqua and Brighton were a world apart: sweeping their division and leading the field by over 30 points was the beginning; being crowned Overall Grand Pony Hunter Champion for the entire Finals was the bridge. And to clinch their extraordinary effort, having just turned 11 years old, Fuqua may be the youngest and highest scoring USEF Pony Finals Champion in the event’s history.

Fuqua, who came to have the ride on Brighton just a few months ago, went into the USEF Pony Finals aboard the flaxen maned pony with an undefeated record. They were to quickly prove their mettle by sweeping all three classes, a rare achievement, and garnering an impressive 1063.65 points, the highest cumulative score for a USEF Pony Finals competitor. With over 30 points differentiation between Champion and Reserve, Fuqua galloped to Overall Grand Pony Hunter Champion and is one of the youngest, if not the youngest ever, Grand Pony Finals Champions. Her trainer, Michael Newman, was awarded the Emerson Burr Perpetual Trophy, which recognizes the trainer of the Overall Champion at USEF Pony Finals and their contribution to the advancement of youth riders.

“Michael doesn’t put a lot of pressure on me, and even when I’m nervous before a big show like USEF Pony Finals he always finds a way to make me laugh before I go in the arena,” said Fuqua. “It teaches me the importance of being relaxed in the saddle. Brighton is such an easy, happy pony; I think that is what has made us click so well even though I haven’t known him that long.” Channeling this happy attitude instilled by her trainer, Kat’s team, including her mom and a few friends, decided to have a dance off to Earth, Wind, and Fire’s classic “Let’s Groove,” while waiting for her ride. Despite some level of embarrassment, Kat admits that the positive, relaxed atmosphere has contributed to her high scores in the show ring.

With the whirlwind of USEF Pony Finals behind her, Fuqua then stepped into the irons of her Junior Hunter, RS Levitation, a.k.a. Jett, to take home the Division Championship at the 2018 Atlanta Summerfest III, held August 16-19, 2018. The Junior Hunter division has been a natural next step for Fuqua as she expands her horizons beyond just ponies, and she states that her success in the show ring comes from the support of her family as well as the advice guidance of trainer Michael Newman.

She and Jett also placed 3rd in the country during July’s USEF National Junior Hunter Championships before setting her sights on USEF Pony Finals and the Atlanta Summerfest. Fuqua’s next outing will be September’s Brownland Fall Horse Show Series in preparation for indoors at Harrisburg and Washington Championship Shows in October.