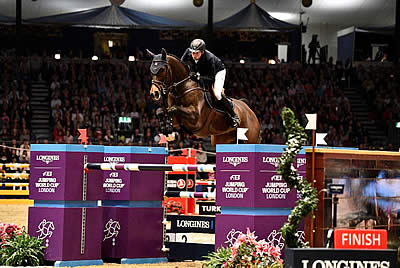 Switzerland’s Martin Fuchs brought his storming year to a close with a superbly ridden win in the eighth leg of the Longines FEI Jumping World Cup™.

The reigning European Champion, fresh from a big win in Geneva last weekend, was second to go in a six-horse jump-off and pulled off a brilliantly accurate turn to the wall on The Sinner to achieve a time of 31.99 seconds that no one could match.

Marcus Ehning from Germany, a three-time winner of the Longines FEI Jumping World Cup™ Final, was fourth with a fence down on the grey Cornado NRW.

Scott Brash, who won this class in 2016 on Hello M’Lady, was the best Briton in fifth on the promising 10-year-old Hello Jefferson, his mount in the winning FEI Nations Cup™ team in Dublin in August, and looks to have sealed his place at the Longines FEI Jumping World Cup™ Final in Las Vegas in April as well as having a potential horse for next year’s Tokyo Olympics.

Irish course-designer Alan Wade set a fair but deceptively testing track, as befits a competition of this stature, and many of the distinguished names faulted unexpectedly.

“It was a great course. I wasn’t sure it would be stiff enough, but it had some light questions – and it got the right result!” said Fuchs. “I had a great round in the jump-off. I knew I would have to take all the risks to put the pressure on the others and it came off exactly as I wanted. I probably couldn’t repeat it if I tried.”

The FEI’s Director of Jumping for three decades, John Roche, described Olympia as “a shining example to other organisers,” and was echoed by second-time visitor Fuchs, who said: “It’s an amazing Show with a beautiful atmosphere and you really feel when you’re in the ring that you’re in a unique place.”