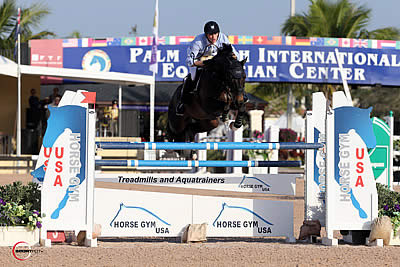 Anthony D’Ambrosio of Red Hook, NY, is the course designer in the International Arena at PBIEC. On Wednesday, D’Ambrosio set the speed track for 39 competitors in the G&C Farm sponsored 1.45m class. Fourteen entries cleared the course without fault and the times were blazing as a roster of top international competitors fought for top honors.

German rider Daniel Deusser got a win right off the bat in his first class of the week upon arriving in Wellington. Deusser and Stephex Stables’ Domingo had the fastest clear round in 66.038 seconds early on in the class to hold on for the win. Irish competitor Andrew Bourns finished second aboard Double H Farm’s Ace High Mike in 67.617 seconds. Colombia’s Manuel Espinosa finished third in 68.507 second riding Luis Garcia’s Zippo CG. Andrew Bourns also took fourth place honors riding Tequestrian Farms’ Carmina through the finish in 69.491 seconds.

Class winner, Domingo, is a ten-year-old Belgian Warmblood gelding by Thunder van de Zuuthoeve x Brownboy, owned by Stephex Stables. Deusser began riding for Stephex last year in May and got the ride on Domingo there from the beginning. Over the last ten months, Deusser and Domingo have formed a great partnership.

“He used to jump two-star grand prix in Belgium and the area with a national rider and he has developed quite well since I have had him,” Deusser noted. “He won a 1.50m and has placed a few times in a few good 1.50m classes, for example in Amsterdam a couple of weeks ago. He is a really competitive horse on that level.”

Commenting on his winning round in Wednesday’s class, Deusser detailed, “I didn’t really know how to start the class; it was my first class here. When I walked the course I tried not to go too crazy. I had a good rhythm and I took all of the inside (turns to the) jumps. We had an option to the last double to go in six or in seven strides and I decided to do the six strides. I must say, in the beginning I thought that it was not enough to win, but I got a bit lucky at the end.”

Deusser has not been to the Palm Beach International Equestrian Center since competing in Wellington at the Global Champions Tour event in 2007. Six years later, he sees significant changes to the facility. On the decision to return, Deusser explained, “My boss did a lot of business here the last couple of years, so it was his idea to come over and I liked it here already six years ago. In Belgium it is snowing at the moment and here the sun is shining, so it is a nice difference.”

Deusser plans to represent Germany in Friday night’s Nations Cup class with his top horse, Cornet d’Amour. The pair was a part of the winning team at Spruce Meadows this summer and he hopes to further their success.

“He is a really nice horse, so I think we have quite a good chance on the team,” Deusser stated. “The last Nations Cup I did was in Calgary last year and we won that one, so I hope we can continue that. Last year Germany won it here also with a really young group, so let’s hope we can do the same this year.”

Also showing on Wednesday, some of the best children, junior and young riders from around the world began their week with Welcome Stake classes in preparation for Saturday’s Hollow Creek Farm FEI Nations Cup competition. Brothers Wilton and Lucas Porter represented the United States well with wins in each of their divisions.

Week eight of the FTI WEF, sponsored by G&C Farm, will continue on Thursday with a full schedule of hunter and jumper competition. Due to a cancellation of the CSIO Welcome Stake Class on Wednesday, the prize money for the Challenge Cup class has been increased. The $43,000 Ruby et Violette WEF Challenge Cup Round 8 is scheduled to start at 4 pm (pending test results). In consultation with the ground jury and agreement with all seven international Chefs d’Equipe, the class has been changed from 1.50m jump-off to 1.50m speed format (238.2.1). The prize money has increased by $10,000 to $43,000 from Wednesday’s cancelled Welcome Classes. The First Year Green Working Hunters will be featured in the E. R. Mische Grand Hunter Ring. For full results, please visit www.showgroundslive.com.