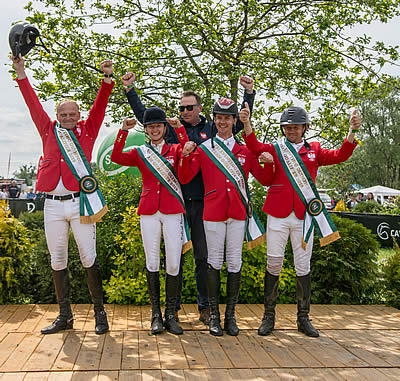 Baborówko, 25th of May 2019 — The Polish team will have the chance to fight as a team at the Olympic Games for the first time since Athens in 2004. The team, along with their trainer Marcin Konarski, in the following squad: Mariusz Kleniuk and Winona, Joanna Pawlak and Fantastic Frieda, Paweł Spisak and Banderas, and Paweł Warszawski with Aristo A-Z, have qualified for the 2020 Olympic Games in Tokyo.

The Polish team was truly in great shape in Baborówko, taking the lead after the first day in the CCIO4*-L class, that doubled as an Olympic qualifier.

Polish athletes had to compete against teams from Russia and Belarus, which became incomplete after cross-country. Nevertheless, the Polish team could not allow themselves to lose their focus, because Mariusz Kleniuk has retired from finishing his cross-country course with Winona. That meant that the rest of the riders from the team had to complete the showjumping trial.

And they carried it through extremely well. The leaderboard was dominated by the white and red flag in the final classification of the CCIO4*-L class. Paweł Spisak (POL) with Banderas took home the first place, second went to the world champion and a two-time Olympic gold medalist Michael Jung (GER) with Fischerchipmunk FRH, and Jan Kamiński (POL) was third with Jard. Further places were taken by Joanna Pawlak (POL) with Fantastic Frieda (fourth) and Paweł Warszawski with Aristo A-Z (fifth).

In the CCI4*-S, for the prize of the patron of the event, Mr Roman Roszkiewicz, with the collective prize pool of 325 000 PLN, Andreas Dibowski (GER) finished on the winning position with Corrida FRH, taking home the 100 000 PLN cash prize. Second place went to Andreas Ostholt (GER) with Corvette 31, and Peter Thomsen (GER) with Horseware Nobleman were third.

Jan Kamiński has kept his lead after cross-country to win the CCI3*-S class for the prize of Kuhn Maszyny Rolnicze aboard Senior. Nadine Marzahl (GER) was second with Vally K, and Merle Wewer (GER) with Captain Hero- third.

All trials of the CCIYH2*-S class for six-year-old horses, for the prize of Kunowo Stables, have also ended. Miroslav Prihoda Jr (CZE) was the best with the Polish-bred Eldorado, second position went to Sabrina Labes (GER) with Sparta’s Prince, and Rebecca-Juana Gerken (GER) finished third riding Fame 227.