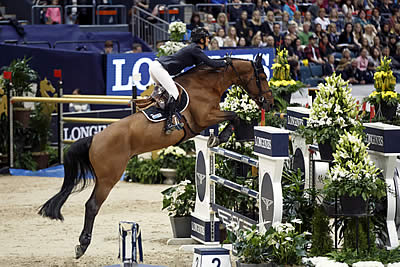 A good position at the end of the first of the three deciding classes is every rider’s aim, but as third-placed Daniel Deusser pointed out this evening the race for a good early result needs to be tempered with caution.

“Today’s goal was to be in top five, six or seven horses because in the next two rounds anything can happen. I was very careful today because of the experience I had last year where one mistake was very costly and I finished in 15th place,” said the German rider who claimed the 2014 Longines FEI World Cup™ title with Cornet d’Amour.

And the top three have every reason to keep looking over their shoulders because fourth spot went to defending champion Steve Guerdat from Switzerland who sneaked home 0.1 seconds faster than Belgium’s Nicola Philippaerts, while the third member of the powerful French contingent, Patrice Delaveau, lined up in sixth spot.

There were 35 starters when Great Britain’s Laura Renwick decided to withdraw Bintang, and it was Delaveau who set the early target over the 13-fence track set by Spanish course designer Santiago Varela. As Technical Delegate Louis Konickx said, it was a clever track with plenty of options for the riders to choose from, and it presented a great opening-day challenge resulting in a very exciting competition.

Delaveau was second into the ring and broke the beam with Lacrimoso in 66.96 seconds, but Deusser was almost a half-second quicker when twelfth to go. Philippaerts’ time of 66.94 seconds was always going to keep him in the frame, but Delestre blew the class wide open when stopping the clock on 66.04 seconds and after that he was the man to beat.

None came close until the penultimate rider, Leprevost, set off with the 13-year-old stallion which she has been specifically aiming at this World Cup title. And Vagabond, whose pedigree includes the super-stallion Vigo d’Arsouilles and the great For Pleasure, showed his pure class when cruising home effortlessly in 63.78 to shave more than two seconds off her compatriot’s target time.

Not even the defending champion Guerdat could challenge that when last to go, but there’s no doubting the threat he will pose when the action resumes tomorrow evening.

Leprevost described her horse’s performance as “amazing”, but she was already feeling fairly confident after a good start to the week. She brought Vagabond to the 2015 Longines FEI World Cup™ Final in Las Vegas (USA) as a 10-year-old and he finished second, so this is clearly a horse that thrives indoors.

“He was very good in the warm-up two days ago and also I was lucky to go at the end of the competition today,” she said. “He has improved a lot in the last year,” she continued. “He’s always been good to ride; he has a super character and a lot of scope. Initially my problem with him was control, but we have done a lot of dressage now so I have no problem with control and we are really good together – I’m very happy!” she added.

Talking about her strategy, she explained, “I had a plan in my head but then I went faster than I thought!” And runner-up Delestre, who currently holds the no. 1 spot on the Longines world rankings, joked, “To be honest I was quite fast, but not stupid-fast like Penelope! We walked the course together so I knew exactly what to expect. I had a super plan in my head and my horse was very good today,” he pointed out.

When asked what it’s like to hold the world no.1 slot when coming to a major event like the Longines FEI World Cup™ Jumping Final, Delestre, who, like Leprevost, is something of a speed specialist, replied modestly, “It is a fantastic feeling, although when you are in the ring nothing changes. But it’s great to have this position even just one time in your career, and it would be a bonus to win the Longines trophy this weekend!”

If a French rider does succeed in taking the title on Monday then it will be for only the second time in the 38-year-history of this much-loved series which includes many of the greatest legends of the sport on its roll of honour. The only previous French champion was Bruno Broucqsault who sprang a big surprise when coming out on top with Dileme de Cephe at the Final in Milan (ITA) back in 2004. But there are two more tough rounds to go before we will know the destiny of the 2016 title, and it all begins again when the second round gets underway at 18.00 local time tomorrow.

The Final consists of three competitions, with the second leg taking place tomorrow evening and the deciding competition on Monday 28 March.

The course consisted of 13 fences including a double and a triple combination and four seconds was added for each fence down in this Table C competition.

The youngest horse was the eight-year-old bay mare Cristalline ridden by Australia’s Chris Chugg. The pair jumped clear and slotted into 17th place.

The oldest horse was the 20-year-old stallion Flexible ridden by America’s Rich Fellers. This horse-and-rider combination had two fences down to finish 24th.

Daniel Deusser GER (3rd): “A lot can happen in the last days. You have to make sure your horse is still in good shape for the second and third day of the World Cup Final.”

Wiveka Lundh, Sport Director of the Swedish Federation and Head of Gothenburg Show Office: “From the Organising Committee’s point of view, we are very happy. For the first evening of the Final we sold 11,021 tickets. It is a fantastic show with fantastic riders and we are more than happy!”