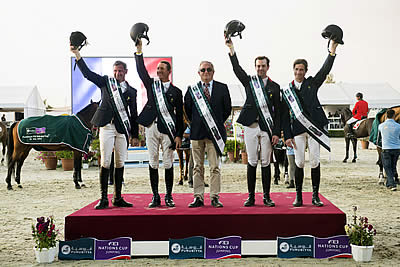 Al Ain (UAE), 18 February 2016 – Team France were convincing winners of today’s opening leg of the Furusiyya FEI Nations Cup™ Jumping 2016 series at Al Ain (UAE). In a competition that proved tough for some, but which also exposed some very exciting new talent, the side led by Chef d’Equipe Philippe Guerdat cruised to victory ahead of Qatar, while Switzerland slotted into third place.

Ukraine clinched fourth spot ahead of Italy in fifth, while Team Ireland made an extraordinary recovery after a shaky start to line up sixth. The Egyptian foursome put up a courageous and impressive effort to fill seventh place ahead of the considerably more-experienced side from Saudi Arabia side who had to settle for eighth place on a day when things didn’t go their way.

A total of 11 nations started in this competition, and when the host country didn’t make the cut into the second round then the two qualifying spots for the 2016 Furusiyya Final which were on offer to teams from the Middle East were already decided at the half-way stage. Qatar and Saudi Arabia can now book their tickets to Barcelona (ESP) in September.

And Team Qatar had even more to celebrate when their last-line rider, Sheikh Ali Bin Khalid Al Thani, produced one of just two double-clear performances on the day with First Devision, the other coming from Ireland’s Anthony Condon with the very exciting stallion, Aristio.

The UAE, Syria and an experimental British side all went out at the end of the first round as the 12-fence course, designed by Italy’s Uliano Vezzani, took its toll. The faults were spread all around the course, with the wide oxer at fence five, the open water which was only 3.8m wide at fence six and the double of vertical to oxer at seven all proving influential. Vezzani increased the degree of difficulty as the track progressed, and the distance from the oxer at eight to the Longines planks at nine caught out a few. The vertical at 10 also hit the ground a number of times but the biggest test was down the last line that began with the triple combination and ended with a water-tray oxer.

A good approach to the combination was vital, and those who didn’t get in there comfortably found the distance to the final oxer very difficult to get, including Irish pathfinder Brian Cournane who couldn’t find a stride and who was decanted from the saddle by the fiery Java’s Keltic Mist. He somehow managed to cling on to the horse until he went through the finish, however, so avoided elimination despite hitting the floor and collected a relatively modest eight faults on his tour of duty.

In complete contrast, three of the four French contenders made it look quite elementary, Matthiew Billot (Shiva D’Amaury), Frederic David (Equador van’t Roosakker) and anchorman Jerome Hurel (OHM de Ponthual) all keeping a clean sheet while Julien Gonin’s only mistake with Soleil de Cornu was an unfortunate one at the very last fence.

As the second round began the French looked completely secure on their zero score, with Qatar next in line carrying eight, Switzerland on nine and Italy and Egypt on 10. With 13 faults on the scoreboard the Ukrainian team was just ahead of Saudi Arabia who had 14, while the Irish looked well out of the picture when just scraping in on a first-round tally of 20. But they would make a real come-back with the best second-round performance of all eight teams that made the cut, when adding only four more to their scoreline.

The second round proved fascinating, with many of the horses that went well first time out showing less enthusiasm, while many of those that looked hesitant and sometimes a little green earlier in the day raising their game and relishing the challenge on returning to the arena. Condon’s Aristio was one of the latter, looking promising first time out but in the second round showing the real class of a son of the great Arko who carried Britain’s Nick Skelton to glory during his illustrious career.

On the other hand, Qatari chances looked shaken when the much-celebrated grey mare, California, who has carried Bassem Hassan Mohammed to many glorious victories, threw in an uncharacteristic objection to going forward after passing the entrance to the arena on her way to fence five. And when she subsequently lost her concentration and returned with 19 faults on the board it looked like Qatari hopes might be dashed.

But at the core of the sport of Nations Cup Jumping is the capacity for others to turn it all around, and when Hamad Al Attiya (Appagino 2) and Khalid Al Emadi (Tamira) each added just five faults apiece, Sheik Ali’s second clear ensured his side stayed competitive to the very end.

The Swiss also added 10 to their tally, counting the five faults each from first-line rider Werner Muff (Pollendr) and anchor Claudia Gisler (Cordel), while Christina Liebherr’s great clear with LB Akteur allowed the nine picked by Edwin Smits (Copain du Perchet) to be the drop score. Meanwhile, the Italians and Egyptians were overtaken by Ukraine who posted just nine this time out. But there was plenty more magic on the way with Egyptian 27-year-old, Mohamed Talaat, improving from a 13-fault first round to pick up just one time fault at his second attempt while, at the tender age of just 17, Saudi Arabia’s Khaled Al Mobty, who sensibly decided to retire with Dona Evita when he couldn’t string the fences together in the first round, returned to finish with 12 at his second attempt to a rousing cheer from the crowd.

The French looked a little less confident in the closing stages when Billot hit the last fence, David lowered the second element of the double and Gonin kicked out both elements here to leave them carrying 16 faults. But with their closest rivals from Saudi Arabia already obliged to add at least 10 to their scoreline, French anchorman Hurel didn’t need to go into the ring for a second time because it was already a done deal.

HH Sheikha Latifa Bint Ahmed Al Maktoum (UAE), niece of HE Sheikh Mohammed, and FEI Steward Maria Hernek (SWE) suffered minor injuries when the in-gate arch was blown over into the warm-up arena by a powerful gust of wind after the prize-giving.

The two women were taken to hospital for assessment and, after treatment for minor injuries, will remain in hospital overnight as a precautionary measure. It is expected they will both be discharged tomorrow.

No horses were in the vicinity when the incident occurred.

Taleb Al Mheiri, Secretary General of the Emirates Equestrian Federation (EEF), has formally requested the Organising Committee of the CSIO5* and the EEF Showjumping Committee to investigate the cause of the incident.

He said course designer, Uliano Vezzani, “did a great job – there was a difficult combination with lots of mistakes but it was not unfair. He found a great balance between being too big and being too easy.”

The French Chef d’Equipe continued, “This year is very important being an Olympic year. We will try and do our best because we have some good horses and a lot of riders at the top of the rankings. Jerome (Hurel) has a good chance to go to Rio having been in the team for the Europeans. He will be in the team in Lummen, La Baule, Rome, Rotterdam and Dublin which will be our counting shows,” he said, referring to the Europe Division 1 series.

“Hopefully we won’t need too strong a team in Dublin because I will be saving the horses for Rio!” he added.

Al Ain in the United Arab Emirates (UAE) hosted the first leg of the Furusiyya FEI Nations Cup™ Jumping 2016 series and the single qualifying round for the Middle East region today.11 nations lined out in the competition, in which three teams – Qatar, Saudi Arabia and the host nation of the UAE – were fighting for the two qualifying spots available for the Furusiyya FEI Nations Cup™ Jumping Final 2016 which will take place in Barcelona (ESP) from 22-25 September.

The team from UAE did not make the cut into the second round in which just 8 teams competed, so Saudi Arabia and Qatar have now booked their tickets to the Furusiyya 2016 Final.

Team France finished the first round on a zero score and won the competition with a total of 16 without their last-line rider, Jerome Hurel, having to jump a second time.

6 horse-and-rider combinations jumped clear in the first round.

Uliano Vezzani (ITA), course designer: “Today was good sport for the horses and I am very happy. The French team is very strong. I think the horses should still have a good amount of energy left for the Grand Prix and I’m pleased about that. A number of riders had time penalties because the course was not easy.”

Philippe Guerdat, French Chef d’Equipe: “We hope we will be invited to compete here again!”