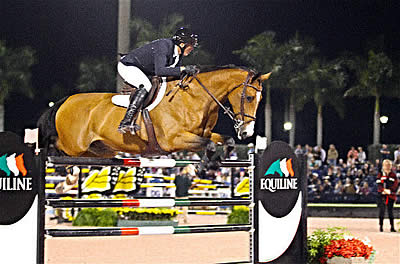 International course designer Anthony D’Ambrosio built tough tracks for the 4* week. Vazquez and his two Messenger Hill Farm mounts, Bachelor 4 and Esprit De Vie, stepped up to the challenge. With Bachelor 4, Vazquez qualified for the Saturday night feature class, the $216,000 Holiday & Horses FEI CSI 4*. They drew second place in the order. With two rails knocked down, the pair maintained a top placing throughout the class. The event produced no fault-free rounds. Only two one-faulters progressed to the short course, Russian rider Liubov Kochetova, who won the class, and Maggie McAlary. Vazquez finished just two spots out of the money.

Bachelor 4 (Baloubet Du Rouet x Maike) is a 14-year-old Rheinlander gelding. At the SFHJA Annual Charity show, they were in the money in both the $35,000 Spy Coast/Sweet Oak Farm Grand Prix and the $10,000 Paul Tracy Open Welcome Stake. The pair was second in both a grand prix and a welcome stake in Chicago earlier this year. In October, they were fifth at the Split Rock Jumping Tour Bourbon International $130,000 CSI 3* Grand Prix.

Holiday and Horses was also a successful show for Vazquez’s Pan Am partner Esprit De Vie. They nabbed third place in the 1.40m Jumpers, just behind Todd Minikus and his two mounts Zephyr and Coverboy.

“I am very pleased with my horses and how they’re performing,” Vazquez said. “That was only Bachelor’s second show under the lights. He’s handling it really well and jumped really easily. He feels strong and confident. To be third in that company in the 1.40m with Sperry (Esprit De Vie) and be behind Todd in first and second is really a good feeling.”

Esprit De Vie (Van De Heffnick x Sacha) is a 12-year-old Belgian Warmblood mare. The pair won a grand prix and a welcome stake in Chicago and had top five placings at WEF in 2016.

“She can be hot at times and tends to get really strong at the end of the course,” he said. “It’s taken me time to figure out what works best for her.  As I learn her preferences we just keep improving our partnership.”

Supported by top-notch coaching from Freddie and Jodi Vazquez, the Messenger Hill Farm Team shined in competition during Holiday and Horses. The team earned multiple championships and great prizes.

Chloe Jhin is a young competitor who consistently performs at the top. During Holiday and Horses she moved up from the Puddle Jumpers to the Low Children’s Jumpers and earned three third place prizes with her own Liberty. Switching to the hunters, Jhin rode her Trousseau, to the championship of the Low Children’s Hunters with her smooth, accurate rounds. The judges awarded the pair two blue ribbons, a fourth and a seventh to seal the tricolors.

Elodie Watrous, the younger of the Watrous sisters, clinched the championship and reserve championship of the Children’s Pony Hunters with Beaverwood’s Foxberry and her own Crystal Acres Chocolatier, respectively. With “Foxy,” they swept the over fences classes and with “Hershey” they nabbed all the red ribbons over fences.

The Vazquezes recently matched talented young rider Chloe Watrous with her first equitation horse, Sunman, owned by Sweet Oak Farm. The duo earned a reserve championship in the Equitation 11 and Under with a first and two second place prizes. She was also reserve champion in the Low Children’s Hunters with Modigliani, owned by Jamie Stryker, earning a first, a second, a third and fifth place prizes. Watrous and her small pony Page 6 and her two medium ponies Beaverwood’s Foxberry and Crystal Acres Chocolatier all earned respectable prizes.

University of Miami student and longtime Messenger Hill Farm client Kira Telford piloted her own Calistoga Gold to the championship of the Adult Amateur Hunters with three blue ribbons, a red and a yellow to their credit. CR Moet and Telford were also in the ribbons in the division.

“We are so proud of the team,” Jodi Vazquez said. “It was a really fun and productive week. We’re looking forward to a fantastic season.”