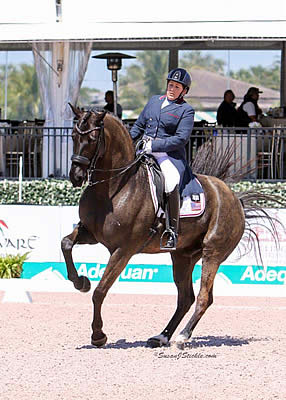 Francis and Danilo, a 2004 Hanoverian gelding (De Niro x Annabella x Andiamo) owned by Patricia Stempel, took the winning spot earlier in the day in the FEI Grand Prix CDI 3*, presented by The Dutta Corp, earning a score of 70.020%.

Commenting on her ride, Francis said, “I’ve really been working with this horse because he’s always had so much talent, but always has these little bobbles in the ring where he gets a little behind the leg or he gets nervous. I’m trying to keep him calm, and reminding him to get a little in front of the leg has been tricky. He is kind of evening out now; I’ve been working him a lot so that he gets more comfortable with giving me a better piaffe. Last year, he would quit frequently; this year he feels much more honest, and even though the piaffe is not as expressive as what he can really do, he stayed there steadily. I want to be able to get him comfortable enough in the arena where I can press him a little more and ask him to be more expressive throughout the test.”

The pair has been making steady progress this season at AGDF, continuously working their way up the leaderboard.

“Overall I’m happy with how he is coming along,” continued Francis. “He’s been consistent so far this season with trying to stay more honest for me in the ring.”

“Overall my horses feel fresh and happy,” said Matute of his rides. “The temperature is lovely so we get the perfect weather with the combination of the coolness but we have the sun, so it’s not too cold. Quantico is a hot horse, so with the extra factor of the weather, sometimes the weather can create a little bit of chaos or it can create a great test with lots of energy, like today. I think that we had a couple of mistakes here and there and can of course continue improving, but overall the energy was there and the horse was really willing to work and give me his best. There were many times that I had great feelings.”

Quantico Ymas has been with Matute since he was two years old. “The philosophy in our house when it comes to this sport is to buy the horses young and build them up. If they are good and have enough quality to stay with our team, we compete them, and if not, we sell them.”

He described of his horse, “Quantico was a very challenging horse. He has jumping bloodlines, but for some reason with him, I’ve always had a special connection. I love all of my horses and have a great connection with them all, but with this horse it’s different and it’s difficult to explain. Although he was challenging a couple of years ago, he eventually understood that the more we work together, the better and more fun it can be.”