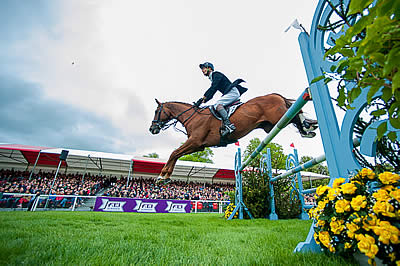 Lausanne (SUI), 10 May 2015 – William Fox-Pitt (GBR) re-wrote the record books when he became the first rider in history to win a CCI4* on a stallion, jumping a magnificent clear round in today’s final phase on Christopher Stone’s Chilli Morning to capture the Mitsubishi Motors Badminton Horse Trials, fourth leg of the FEI Classics™ 2014/2015.

The popular German rider Ingrid Klimke finished runner-up by just 1.2 penalties on her new star Horseware Hale Bob, and New Zealander Jock Paget was third on Clifton Lush, a great achievement on a horse coming back after a year’s lay-off for injury.

The finale could not have been more tense, with three penalties – less than the cost of a rail down – covering the first five riders, and all attention on the great Kiwi rider Andrew Nicholson aiming to win Badminton for the first time in 31 years of trying.

Paget, lying fifth after Cross Country, eased the pressure on his rivals when Clifton Lush hit the 11th fence to pick up four faults. Klimke, next into the arena, was immaculately prepared, having been competing her German Thoroughbred gelding in Jumping classes over the winter, and they produced a confident clear.

Next to go were the 2014 runners-up, Oliver Townend (GBR) and Armada, but the Yorkshireman had humorously predicted that he wouldn’t be taking home any trophies as the 16-year-old gelding is notoriously difficult in this phase. Four fences down dropped the pair to 11th.

Fox-Pitt is known for his ability to deal with extreme pressure and the generous Chilli Morning more than rose to the occasion, jumping as if on springs to record a clear and switch the burden onto the shoulders of his New Zealand rival.

As the crowd erupted, Nicholson entered on an unsettled Nereo, the 15-year-old chestnut clearly unnerved by the electric atmosphere, and when he hit the second fence it was all over. Two more rails went as well and the pair dropped to sixth place, but the New Zealander somehow managed to find a smile. “I’ll live to fight another day,” he promised.

Fox-Pitt, the first British rider to win Badminton for six years, last triumphed here in 2004 on Tamarillo. “That was a long time ago, and it makes you realise how hard it is,” he said. “It was very easy to think it was all over with a rider like Andrew in front. He doesn’t make many mistakes.”

Chilli Morning will now return to stud duties and will not compete again this year. “He’s a fantastic horse with a brilliant brain and he wants to work.” Fox-Pitt was quick to heap praise on Nick Gauntlett, the rider who produced the stallion up to four-star level.

Ingrid Klimke said Horseware Hale Bob had given her a great ride in all three phases and she was keen to pay tribute to Chris Bartle, the German team trainer “because he always had faith in us”.

Jock Paget, who withdrew his 2013 winner Clifton Promise (10th after Cross Country) before Jumping, said he’d had “a good feeling” about Clifton Lush, a ride he took over from fellow Kiwi Joe Meyer. “He did his maximum in every phase,” said Paget. “I knew that even if he jumped clear, I wouldn’t catch the other two.”

Kelvin Bywater’s Jumping track proved influential, with clear rounds at a premium. Sir Mark Todd (NZL) rose from ninth to fourth with just one time penalty on the German-bred Leonidas ll and Bettina Hoy (GER) had her best ever Badminton result with fifth place on Designer 10 after incurring only four faults.

Nicola Wilson (GBR) rose 11 places to seventh with a clear round on One Two Many; Aoife Clark (IRL) climbed three places to eighth with four faults on Vaguely North and fellow Irishman Michael Ryan shot up from 21st to ninth with a penalty-free round on Ballylynch Adventure. Last year’s winners, Sam Griffiths (AUS) and Paulank Brockagh, were 10th.

Klimke’s second place at Badminton added to her win at Pau (FRA) last year propels her into first place on the FEI Classics™ 2014/2015 leaderboard and she has a good ride, Escada JS, for the fifth leg at Luhmühlen (GER) next month. Fox-Pitt, now second in the rankings, following a fourth place in Kentucky (USA) recently, is also planning to compete at Germany’s premier event, so the contest should go right to the wire at Burghley (GBR) in September.

Fox-Pitt is married to Alice, a television racing commentator. They live near Sturminster Newton, Dorset, and have two sons, Oliver and Thomas, and two daughters, Chloe and Emily.

Chilli Morning is a 15-year-old German-bred stallion by Phantomic, a thoroughbred, out of a Jumping-bred mare, Koralle. He was bought in Germany as a youngster by Christopher Stone.