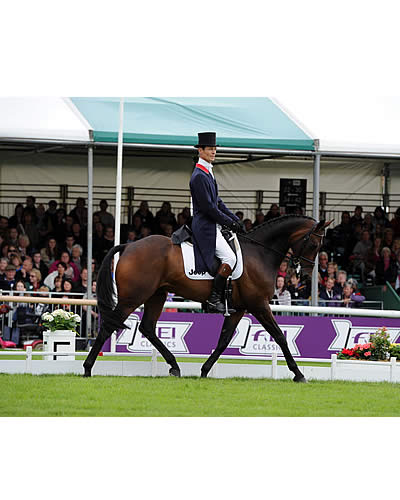 The race is on: William Fox-Pitt (GBR) and Fernhill Pimms draw level with Michael Jung (GER) and FischerRocana FST after Dressage at the Land Rover Burghley Horse Trials (GBR), sixth and final leg of the FEI Classics™ 2014/2015. (Trevor Meeks/FEI)

Their only mistake in an attractive test was a fluffed first flying change which scored fours. “I’m delighted with Pimms; that’s the first time he’s done that test in an arena – there’s four flying changes and that’s a big step up,” said the world number two. “He’s a lovely horse to ride on the flat; he loves showing off.”

Fox-Pitt took on the ride on Fernhill Pimms, an 11-year-old by Ard VDL Douglas, in 2013. The horse was produced in Ireland by Portuguese rider Duarte Seabra for Carol Gee, who owns him with Catherine Witt. Fox-Pitt won the prestigious young horse CIC3* at Blenheim (GBR) in 2013 on the bay gelding and finished fifth at Bramham CCI3* (GBR) this year.

In contrast, Sam Griffiths (AUS), who is lying third on Happy Times with a score of 36.8, has the security of knowing he is on one of the most experienced horses in the sport, let alone at Burghley. The 16-year-old by Heraldik, also the damsire of Michael Jung’s La Biosthetique Sam, has been placed five times at Burghley.

“He’s always very consistent on the flat, but he really pulled out the stops today,” said Griffiths, who is also equal 14th on his 2013 Badminton winner Paulank Brockagh.

Griffiths’ compatriot Andrew Hoy has now slipped a couple of places to fourth on Rutherglen, with just a 0.9 penalty ahead of another hugely experienced combination, Oliver Townend (GBR) and the 16-year-old Armada. They brought the afternoon to an exciting conclusion when scoring 38.7.

“I’ll be a stone lighter this time tomorrow,” Townend joked, a reference to his being the only rider to have three horses. “The first one [Dromgurrihy Blue, currently lying 24th] is an unknown quantity at this level and distance; the second [Samuel Thomas ll, equal 53rd] is only a baby but I love riding him; and everyone knows Armada.”

Tim Price (NZL), riding the Irish Sport Horse gelding Ringwood Sky Boy, is in sixth place; he will be aiming for a first placing at his fourth attempt at Burghley.

Michael Jung (GER) on his second horse, La Biosthetique Sam, is sharing seventh place with another German first-timer at Burghley, 20-year-old Niklas Bschorer on Tom Tom Go 3, on the healthy score of 38.7.

Frenchman Cedric Lyard is ninth on Cadeau du Roi ahead of British first-timer Rosalind Canter (Allstar B), 10th, who is hanging on to her spot ahead of a cluster of experienced antipodeans including five-time Burghley winner Sir Mark Todd, equal 12th on Leonidas ll.

Riders are viewing Capt Mark Phillips’s Cross Country course, which runs in a reverse direction to usual, with plenty of respect and a bit of trepidation. “It’s tough out there,” commented Sam Griffiths. “You need a power jumper with some blood. This is a course that will find out any weaknesses.”

Fox-Pitt, who plans to take all the straight routes, added: “Mark has been very brave. Everyone will have their work cut out because we’re all starting from a blank sheet with the different direction. The first three fences are the only nice ones! I think Pimms is ready for it. I just want him to rise to the challenge and go well.”

Oliver Townend will be first out onto the course at 11am tomorrow on Dromgurrihy Blue; follow the action on www.burghley-horse.co.uk and www.burghley.tv and, in Britain, on BBC Red Button.