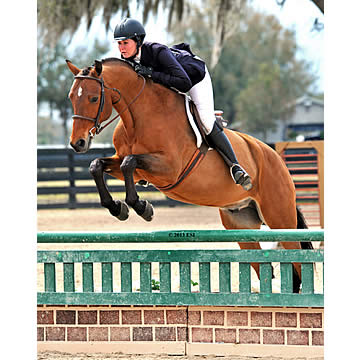 Holloway, daughter of grand prix rider Brandie Holloway, piloted Hays Investment Corp.’s Bellini to the top scores in both rounds of this weekend’s hunter prix, earning an 88 and 89 for a combined score of 177. “Today’s course was straightforward, but the new ring with the bank keeps the courses fresh and fun to ride,” said Holloway.

Bellini and Holloway were partnered this past summer to show primarily in Junior Hunter divisions and collected six top-five ribbons last week, in addition to their blue in the Devoucoux Hunter Prix. “Bellini is very easy, very honest and a joy to ride. He was awesome today,” said Holloway of the seven-year-old Warmblood gelding. “If he hasn’t sold by September, he is most definitely the horse I would choose to ride in the Diamond Mills Final.”

Adrienne Marciano of Collegeville, Pennsylvania, try as she might to best Holloway, pocketed a pair of 86s for a combined score of 172, which was good enough for second place. She was aboard her own Grey Street. The top three was completed with Harold Chopping of Southern Pines, North Carolina and Caroline Russell Howe’s Caramo earning a 170.5.

Only fractions of a point decided fourth and fifth places. Meghan Flanagan of Atlanta, Georgia and her own O’Ryan finished fourth with a combined score of 169.25, and Nicole Lyvere of Lakewood, Colorado settled for fifth aboard her own Drumline with a 169.

Devoucoux, the makers of fine French saddles, will continue to present weekly hunter prix, which represent the only way for hunter riders to punch their ticket to the prestigious Diamond Mills Hunter Prix Final during HITS Championship Weekend in Saugerties this September.

Kristen Sameth of Lebanon, New Jersey was third aboard her own Vandrin and Erica Lipke of Hamburg, New York was fourth on Christine Hannon’s Knight Call. Eliza Month of Scarsdale, New York rounded out the top five in the irons of her own Duval.