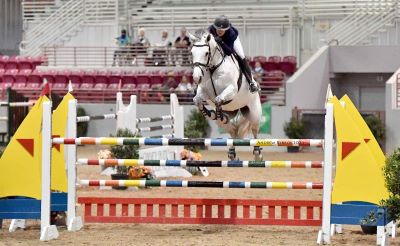 Twenty horse and rider teams competed for the blue in the Week I $35,000 Sidelines Grand Prix, presented by EMO over a course designed by Paul Jewell of Windsor, New Jersey.

The first round was set with a time allowed of 75 seconds and of the twenty horse and rider teams, only nine would qualify for a jump off round.

Tracy Fenney of Flower Mound, Texas in the irons of MTM Farm’s MTM Dolce Vita led the charge as the first to tackle the jump off round. The course was set with a time allowed of 48 seconds and Fenney and Dolce Vita beat that time with their own clear round in a time of 37.765 seconds, setting the new time to beat. “Dolce Vita was really good,” commented Fenney. “She’s come along way and she’s young. Obviously, she’s been showing outside the entire winter season and she just walked into the indoor and was amazing. Coming from an outdoor arena to an indoor is a significant change and you need to adjust how you ride that,” she added.

Dominique Damico of Berwyn, Pennsylvania and Seth Vallhonrat’s Chakalaka followed Fenney and Dolce Vita in the order. Although the pair went clear, their time of 39.829 seconds wouldn’t be fast enough to take the lead and the pair would finish in fourth overall.

Dorothy Douglas of West Bridgewater, Massachusetts and Nina Moore’s MTM Cedrik followed Damico and Chakalaka in the order, but a heartache rail at the final fence in a time of 44.201 seconds would see them finish in eighth overall. “We’ve only had Cedrik for a short while and he’s come a long way and really doing amazingly well,” commented Fenney.

Fenney returned to the arena in the irons of MTM Farm’s MTM Apple. The pair flew through the course in a time of 35.063 seconds and set the new time to beat.

“Apple is amazing,” said Fenney. “She’s really a fast horse and it’s funny because she’s really big – over 17 hands and kind of fat. She looks kind of like a brood mare,” she laughed. “She’s the sweetest mare. She has this extra gear and leaves strides out where others don’t. Her turning isn’t so great, but overall, she’s quite perfect. A perfect apple,” she added.

Caroline Mawhinney of Woodside, California and her own Stella Levista were next to go but their four fault jump round in a time of 46.137 seconds would see the pair finish in ninth place overall.

Jordan Petersen of High Springs, Florida in the irons of Derek Petersen’s Diamant’s Legacy followed in the jump off order, but four jump faults in a time of 39.066 seconds would see them finish in seventh overall.

Fenney and MTM Reve Du Paradis took their turn at the jump off round and despite the fact that the pair would be the fastest jump off round, four jump faults in a time of 34.132 seconds would see them finish in fifth place.

Kaitlyn Williams of Paoli, Pennsylvania aboard her own Cassio Melloni followed Fenney and MTM Reve Du Paradis with their own fault-free round in 39.522 seconds, moving up to finish in third behind MTM Dolce Vita and Fenney.

Molly Dinapoli of Ocala, Florida and Infinity Farm’s Reason De Ganad sat in the enviable last to go position in the jump off round. Four jump faults in a time of 37.484 seconds would find them finishing in sixth place overall.