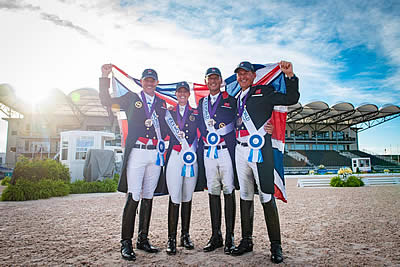 Olympia, The London International Horse Show will welcome Team GBR’s medallists from the FEI World Equestrian Games™ (WEG) Tryon 2018 to the annual event to take part in a celebratory parade on the evening of Thursday 20 December 2018.

The parade marks the success of British athletes, who won eight medals this summer, giving spectators the opportunity to show their appreciation for these top riders, owners and Chefs d’Équipe, after their successful campaign at the WEG.

Reigning Olympic champion, Charlotte Dujardin CBE, will be a central figure in the parade after she and her nine-year-old mare won individual bronze in the Dressage Grand Prix Special competition, with a personal best score of 81.48%. Dujardin, who also clinched team bronze in the Dressage Grand Prix on the first day of the dressage competition, will be joined by fellow bronze medallists and teammates, Carl Hester MBE, Spencer Wilton, and Emile Faurie.

Olympia will also celebrate the achievements of Gemma Tattersall, Piggy French, Tom McEwen, and Ros Canter who, after a commendable year, took prime podium position in the Eventing at the WEG. Not only helping the team to post the lowest score in world championship history, Ros Canter held her own to take individual gold, making it a double sweep for the record-breaking Brits.

Adding to the line-up will be Natasha Baker MBE, who stormed the Dressage arena to take a silver medal in the Grade III Para-Dressage Individual Championship. Baker’s win came aboard Mount St. John Diva, adding to Mount St. John Equestrian’s medal haul, the breeder of Dujardin’s ride, Mount St. John Freestyle. Baker will be joined by Nottinghamshire’s Sophie Wells MBE, whose world championship got off to a golden start by taking top honours in the Grade V Individual test. She topped off a successful Games by winning her second gold medal, this time in the Grade V Individual Freestyle. Baker and Wells will be accompanied by Sir Lee Pearson and WEG debutant, Erin Orford, who, together, won silver in the Para Dressage team competition.

Show Director, Simon Brooks-Ward, said: “It is an honour to be welcoming the leading British equestrian teams to this year’s Olympia. The parade hails the fantastic achievements of Team GBR and the exceptional group of riders.”

The WEG athletes will be accompanied by the successful British Youth teams, as this next generation of riders join the Thursday evening parade to celebrate their own medal achievements of 2018. One athlete who will take part is Jack Whitaker, son of Show Jumping legend Michael; Jack won individual Show Jumping silver at the 2018 Youth Olympic Games in Buenos Aires, Argentina this September.

Taking place from 17-23 December, Olympia will provide the platform for top international equestrian competition, with many of the World’s elite riders expected to compete at the Show. Highlights include three FEI World Cup™ competitions in Show Jumping, Dressage, and Carriage Driving, not to mention international displays from La Garde Républicaine, and ‘Land of Fire’ Azerbaijan, bringing their traditional Karabakh horses to the Grand Hall.