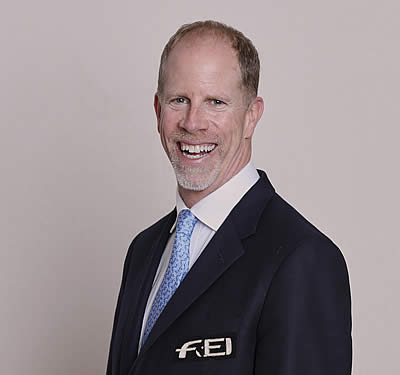 Equestrian Canada has named FEI Vice President Mark Samuel the recipient of the 2019 Gold Medal Award, the highest and most prestigious of the governing body’s national honours.

The award is only given when the Equestrian Canada President and Executive believe a recipient has exceeded expectations in providing long and exceptional service to the organisation as a builder of the sport both nationally and internationally.

“I am honoured and humbled to receive this prestigious award and I wish to thank Equestrian Canada for this recognition,” Mark Samuel said.

“I am blessed that my passion, experience and abilities have found purpose in service to my sport, my country, and now, the FEI. Contributing to making a sustainable, meaningful difference is its own reward.

“I share this award with all of my fellow tireless volunteers who contribute their time, talents, and energy in support of our great industry and in service to our incredible equine partners. It is my hope to continue to be a deserving recipient of this award and an ambassador for horse sport locally and globally.”

Having first been elected Chair of FEI Regional Group IV in 2012 and then re-elected for a further four years in 2016, Mark Samuel has played a key role in helping to direct the development of equestrian sport in 11 North American and Caribbean countries.

He was unanimously elected FEI 2nd Vice President at the General Assembly 2017 and was subsequently elected Vice-President in 2018 in Manama (BRN).

Mark Samuel has been an invaluable member of multiple FEI working groups and committees, including chairing the FEI Officials Working Group, which was tasked with providing analysis and discussion on all issues related to Officials, from education to age limits.

He played an important role in the Temporary Endurance Committee, facilitating communication between the Committee and the FEI Board during a comprehensive review of the discipline’s Rules aimed at bringing the sport back to its roots. Along with the Chair Sarah Coombs and the rest of the Committee, he welcomed the overwhelming support for the Rule changes at last year’s General Assembly in Moscow (RUS).

Most recently, he was called on to join the FEI’s Covid-19 task forces, sitting on each of the discipline-specific groups to help evaluate the impact of the pandemic on the FEI Calendar and make specific recommendations to counter negative effects.

“We are delighted to hear that Equestrian Canada is to give Mark Samuel this award and I cannot think of a better qualified recipient,” FEI President Ingmar De Vos said.

“Mark has dedicated an inordinate amount of time and expertise to international equestrian sport over the years. He is well respected by all who know him for his remarkable intellect, charisma, and ability to always find the right words in any situation.

“His depth of knowledge of sport, business, and governance is matched by his generosity and willingness to help people during difficult times. We saw this determination in action in 2017 when he co-founded the Caribbean Equine Relief Fund to raise funds for relief efforts for equines and equestrians in the aftermath of Hurricanes Irma and Maria.

“I am proud to call him my friend and can only hope that this is first of many accolades to come his way.”

As a Jumping athlete, Mark Samuel represented Canada at the FEI World Equestrian Games™ 2002 in Jerez (ESP) and the 2003 Pan-American Games in Santo Domingo (DOM).

He has also been instrumental to the sport on a provincial level as a co-founder of the Ontario Hunter Jumper Association (OHJA) and past Director of Ontario Equestrian (OE).