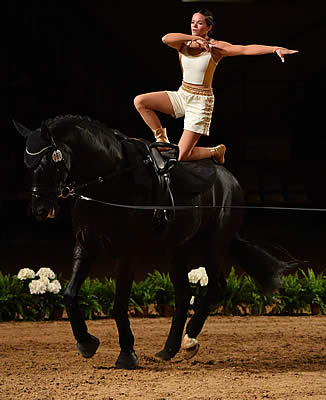 The Grand Manège du Cadre Noir in Saumur, the world capital of equitation and equestrian arts, was full! Some 1500 people were present for the consecration of the new winners of the FEI Vaulting World Cup Final in Saumur 2019. The public at the international vaulting championships is said to be fantastic: the public in Saumur has once again demonstrated this. A thrilling atmosphere among the riders of the Cadre Noir!

First to go, the ladies were living an important moment in vaulting history. The queen Kristina Boe (GER), double current world champion, Europe champion, defending title of the FEI World Cup Vaulting Final, was doing her goodbye run on the majestic ring of the Cadre noir de Saumur. Second on the provisional ranking before this second round of the competition, the German falls off just a couple of seconds before the end, and finally finishes at the 4th place. “I think my horse decided to retire a couple of strikes before me,” she said, smiling. The misfortune of some makes the happiness of others: her compatriot Janika Derks, 1st in the provisional ranking, had a way free to present the energetic and athletic vaulting that represents her. For the first time in her career, Derks climbs on the highest step of the podium. Switzerland’s Marina Mohar is second and Switzerland’s Nadja Büttiker third.

For the males, the Colombian phenomenon Juan Martin Clavijo didn’t disappoint and made a freestyle like a virtuoso. Settled in Switzerland since October, running his first FEI Vaulting World Cup Final, he was sensational during these three days of competition in Saumur. The young Colombian explained during the press conference that he ran a freestyle on the theme of slavery on a Russian music with an evocative title of “Horses.” He outstrips some of the international championships vaulters: Germans Jannik Heiland, world champion in title in the nations cup and vice champion of the world individual, was second, and Thomas Brusewitz qualified for the third time in his career in the FEI Vaulting World Cup. Clément Taillez, only French vaulter qualified for this World Cup Final in Saumur, finishes at fourth place, reaching his goal of being in the top 5.

Last category running their FEI Vaulting World Cup Final, the pas-de-deux is won by the Germans Theresa-Sophie Bresch and Torben Jacobs, outstripping the Americans Haley Smith and Daniel Janes and Switzerland’s Zoe Maruccio and Syrra Schmid. Starting to be a habit for the German couple, who together have won two times this FEI Vaulting World Cup, Torben having it won even a third time with another partner. The pair decided also to say goodbye to the competition to focus on new projects.