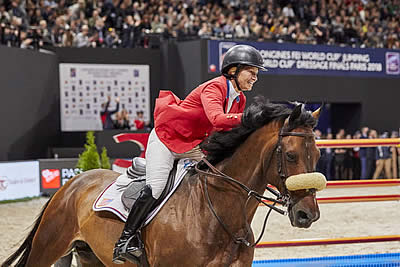 When Beezie Madden (USA) landed off the final fence at the 2018 Longines FEI Jumping World Cup™ Final in Paris (FRA) with Breitling LS, her final, nearly perfect score of 4 not only secured the Cazenovia, NY native her second career victory in a World Cup Final, but it also marked the second straight year the North American League (NAL) produced the World Cup Champion.

The Longines FEI Jumping World Cup™ North American League will begin its fourth season Sunday 26 August 2018 at 2:00 pm (PT) at Thunderbird Show Park, Langley (CAN). The CSI 4*-W event kick-starts a league that has continued to grow in stature, as Madden’s Parisian victory followed up a win for McLain Ward (USA) and HH Azur in Omaha (USA) the previous year. The back-to-back American triumphs in show jumping’s most prestigious individual indoor championship give the North American League a 2/3 strike rate at the World Cup Final since the league’s inception in 2015.

The North American League is divided into two sub-leagues, with both the East Coast and West Coast receiving a new location in the 2018-2019 season. Columbus (USA) will serve as the second stop on the east coast on Sunday 7 October 2018, while Leon (MEX) will conclude the west coast sub league on Saturday 9 February 2018.

In addition to Madden, who receives automatic qualification as the event’s defending Champion, seven east coast USA riders, three west coast USA riders, two Canadian riders, and two Mexican riders will punch their tickets to the 2019 Longines FEI Jumping World Cup™ Final in Gothenburg (SWE), which begins on 3 April 2019. Riders may earn points in up to seven qualifying events throughout the league season, and their four best results from those classes will count toward their final league standing.

An exciting cast of riders is headed to Langley, including the USA’s Jennifer Gates, Eve Jobs, three-time World Cup Final veteran Karl Cook, and 2012 World Cup Champion, Richard Fellers. The entries also include the California-based Ashlee Bond, who is set to represent Israel in the upcoming FEI World Equestrian Games™ Tryon (USA) in September. Alison Robitaille (USA) and Richard Spooner (USA) who both qualified for the World Cup Final last season, are also slated to compete. Together, they have 20 World Cup Final appearances between them.

“The World Cup Final is the type of competition where you really have to have the right horse at the right time, and all cylinders have to be firing…” — Richard Spooner (USA)

“Anytime you start a World Cup season, you’re just hoping to get some good points early, so there’s not a lot of pressure on you at the end,” said Spooner, who led the west coast standings of the North American League last season. “The finals are in Gothenburg this season, and it’s a nice, big arena with a lot of history — that’s where it really all began with the World Cup. It’s an exciting year.”

Spooner plans to compete the 9-year-old Quirado RC in the $145,000 CSI4*-W Longines FEI Jumping World Cup™ Langley. The big grey, who finished fourth in Thermal’s World Cup class last season, won two five-star ranking classes this summer at Spruce Meadows (CAN). The gelding also finished fourth in the CSIO5* $235,000 Longines Grand Prix at Langley in May. His partner in Paris was the 11-year-old Chatinus, who won the World Cup qualifier at Las Vegas in 2017.

“I’m looking forward to [Langley],” Spooner said. “Quirado is a 9-year-old and a little green, but he’s an extraordinary horse. I’m hoping to have Chatinus do some of the indoor [qualifiers] in the tighter indoor rings later in the season.”

“The World Cup Final is the type of competition where you really have to have the right horse at the right time, and all cylinders have to be firing,” Spooner said. “The [North American League qualifiers] really set you up for that and let you know if everything is going in the right direction, or if you’re better off waiting for another year and another opportunity. The World Cup Final is always the highlight of the indoor season, and as a major, I enjoy it.”