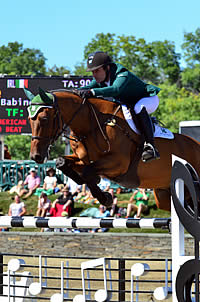 Saugerties, New York (January 15, 2015): HITS, Inc. is pleased to announce that the Fédération Equestre Internationale (FEI) has approved the Saugerties $1 Million Grand Prix, presented by Wells Fargo, September 6, 2015, as a CSI-5* event. Based on the prize money and the ranking, this class should be the highest-ranked class in the United States this year.

The new FEI CSI-5* designation comes as HITS continues to expand its offering of international events to attract both U.S. and foreign competitors at the highest level.

A total of 50 riders will be eligible to compete in the CSI-5* Saugerties $1 Million Grand Prix, presented by Wells Fargo, with 35 riders chosen from the Longines FEI World Ranking List, and 15 riders invited as wild cards by HITS.

“HITS recognizes the need for U.S. riders to gain FEI ranking points right here in their home country, without the expense or hassle of traveling to Europe and beyond. HITS strives to offer the best opportunities for riders, both domestic and foreign, to compete in the United States. The FEI’s CSI-5* designation is a testament to the quality of this event,” said HITS President and CEO Thomas Struzzieri. “This solidifies HITS’ standing as the most dynamic American showcase for world class riders and horses. It places Saugerties even more clearly on the international show jumping map.”

Kevin Babington, a native of Ireland, who competed in the 2014 Zoetis $1 Million in Saugerties, was thrilled when he learned of the new CSI-5* designation. “I was very happy to hear the Saugerties Million is getting an FEI CSI-5* ranking. As an international rider, if I’m going to be considered for a Nations Cup team or other international events, it’s important for me to stay on top of the world ranking position. Many U.S. riders have had to travel to Europe and Canada to stay up in the rankings, so having a [CSI-]5* show close to home is very exciting.”

Babington continued, “I would like to thank Tom and his team at HITS for raising the bar and staying on top of this ever-changing sport of show jumping.”