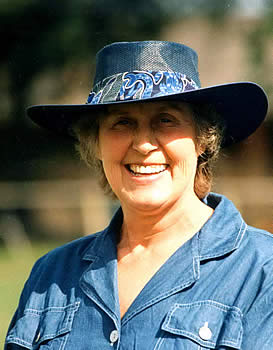 “Jonquil will become the first person in equestrianism to receive a Paralympic Order, and we are delighted that she is being recognised for the vital role she has played in developing Para-Dressage into the international sport it is today, and for which the equestrian world will be forever grateful,” said Trond Asmyr, FEI Director, Dressage and Para-Dressage.

Jonquil Solt will join a select group of people who have made outstanding contributions to the Paralympic movement, including the Mayor of London Boris Johnson, who accepted the honour of the Paralympic Order on National Paralympic Day one year on from London 2012, and Lord Sebastian Coe, Chairman of the London 2012 Olympic and Paralympic Games Organising Committee.

Jonquil Solt has been involved in Britain’s Riding for the Disabled Association (RDA) since 1965, and in 1980 was invited to become Founder Chairman of its newly formed Dressage Committee.

She was subsequently made Founder Vice-Chairman of the International Paralympic Equestrian Committee (IPEC) in 1991, before becoming its Chair in 1995. During the 12 years of her chairmanship, she travelled the world promoting and developing Para-Dressage as an international sport.

“At that time there were three of us – Dressage coach and judge Inger Bryant, classification expert Dr Chris Meaden, and me,” Jonquil Solt said. “We travelled around the world and got people to understand the sport more, and that’s how it grew.

“We worked very hard to bring in as many countries as we could and train everybody. We answered their questions, visited them and got the sport accepted. At that time people were rather afraid of disabled people, but the support we had was incredible.”

As well as raising the profile of Para-Dressage, Jonquil Solt played a key role in setting up an infrastructure that could support growing national and international Para-Dressage competitions, including the first World Championships in the late 1980s. That process led to the inclusion of Para-Dressage in the Paralympic Games for the first time at Atlanta in 1996, where Jonquil Solt was President of the Ground Jury.

In 2001, in another major development for the sport, Jonquil Solt co-signed the cooperation agreement which eventually saw Para-Dressage become an FEI discipline in 2006. In doing so, it became the first Paralympic sport to leave the IPC and join an international governing body, alongside and on an equal footing with able bodied athletes. “That gave me a huge sense of pride. Receiving the Paralympic Order will too, and it makes me feel humble, honoured and extremely appreciative. I’m looking forward to it.”

Three other Paralympic Orders will be awarded in Athens later this month – to Bob Balk, former Chairperson of the IPC Athletes’ Council, Michael Barredo, former President of the International Blind Sports Federation (IBSA), and Duncan Campbell, founder of wheelchair rugby.