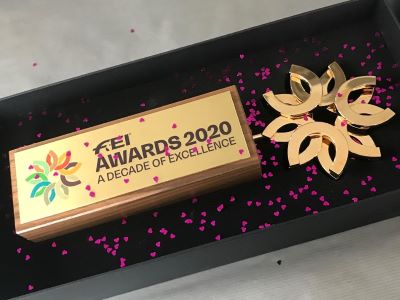 This year the task of choosing the best of the best from the past decade’s previous awards winners was entirely in the hands of the public who cast their votes for the 55 nominees from 19 nations. Over 70,000 votes were cast on FEI.org and on the Chinese social media platform WeChat. Podiums in each of the five categories were occupied by a global spread from Germany, Great Britain, Australia, China, Ireland, Palestine, South Africa, The Netherlands, and Zambia.

With the FEI Awards Gala cancelled this year due to the pandemic, the winners were revealed to their online audience in a moving video narrated by British Paralympic champion Natasha Baker.

Semmieke Rothenberger, winner of the Longines FEI Rising Star Award, was overcome with emotion when her family held a surprise presentation of the award at their home in Germany.

“I’m very grateful that so many people voted for me and that there is such a big fan base of people that support me,” Semmieke Rothenberger said. “It is also quite surreal because there were so many good athletes in this category, including my brother Sönke, so I didn’t really expect that I would win it again.”

The 21-year-old, winner of 22 FEI European Championship medals through all the youth categories right up to Young Riders, has even bigger goals for the future.

“My parents have always taught me to dream big and reach for my goals and I would really like to canter on that centre line of the Olympic Games one day. I’ve been to the Olympic Games in Rio with my brother and I would love to see myself there with one of my horses and feel the atmosphere of representing my country at the Olympics!”

“This Longines FEI Rising Star Award was created to recognise young athletes between the ages of 14 and 21 who demonstrate outstanding equestrian sporting talent,” Longines Vice President of Marketing Matthieu Baumgartner said. “We are delighted to once again celebrate Semmieke Rothenberger’s dedication to equestrian sport and we applaud her determination, passion and energy, which we are confident will take her to the very top in her sporting career.”

“This is all still a little bit unreal but I’m so thrilled and happy,” she said. The 52-year-old, who was also nominated for the Award in 2015 and 2017, going on to win in 2019, is only the second person in history to win back-to-back European titles on the same horse, claiming individual gold with SAP Hale Bob OLD at the Longines FEI Eventing European Championships in 2017 and 2019. This year she took her fifth German National Championship, having won previously in 1999, 2000, 2001, and 2009, sharing the spotlight with her daughter Greta Busacker, who was crowned German National Junior Champion on the same day.

Although Ingrid Klimke has set her sights on winning her first individual gold at the Tokyo Olympic Games next year, she is not shy of stating her longer-term ambitions. “I’m already thinking of Paris 2024 which is not so far away. I love to ride, I love to compete, and I love to keep going.”

There was further cause for celebration at the Klimke stables when Carmen Thiemann, head groom for more than two decades, won the Cavalor FEI Best Groom Award and a voucher from title sponsor and FEI Official Nutrition Partner, Cavalor.

“It’s the trust between us and the fun we have with the horses,” Carmen Thiemann said when asked about the longevity of her professional partnership with Ingrid Klimke. “I try to make the horses happy and healthy so that they are ready to work with Ingrid.”

Carmen Thiemann, who won the FEI Best Groom Award in 2013, has a special bond with the Klimke family having started her career as a groom for Ingrid’s father Dr Reiner Klimke, an Olympic Dressage legend for Germany.

“Everyone who knows Carmen knows how valuable she is as a person and especially in her job with the horses,” a delighted Ingrid Klimke said.

“We have been successful as a team for many years and I would never go to a show or a Championship without Carmen. She is a best friend to the horses, and I can totally focus on my job, either in Cross Country or in Dressage, knowing that Carmen brings them out as happy and healthy as possible.”

It is also interesting to note that the runners-up in these two respective categories – Peden Bloodstock FEI Best Athlete and Cavalor FEI Best Groom – went to another dynamic duo: Great Britain’s superstar Charlotte Dujardin and Alan Davies, the experienced and highly respected “Super Groom” to Carl Hester’s horses, and also a key member of the FEI Grooms Working Group.

Ten years after winning their first award, the Ebony Horse Club (GBR) was once again the recipient of the FEI Solidarity Award.

“This award, coming at the end of a really challenging year, just validates everything that we’re working for,” General Manager of the Ebony Horse Club Naomi Howgate said. “To be recognised as the best of the decade is such a huge accolade and has made us extremely proud of the work that we do here.

“Ebony is a youth club with horses, rather than a riding centre, because our ethos is all about helping our young people be the best they can be both on and off the horses.”

The organisation, which is based in Brixton, South London, provides young people from low income families with the opportunity to ride horses and take part in a variety of sporting and educational activities.

The FEI has provided the 2020 FEI Solidarity Award winner with a financial donation to support the Ebony Horse Club projects. “We are a small club and we don’t have lots of resources,” Naomi Howgate said. “Donations are everything, as it is how we can provide the work we are doing. We support about 400 young people in a year and we can only do that with donations of money that allow us to run our services. So receiving this from the FEI is really fantastic!”

This year’s FEI Against All Odds Award goes to German Paralympian Dr Angelika Trabert. Born without legs and only three fingers on her right hand, Angelika is well known in the equestrian community for her indefatigable spirit and her motto, “It’s ability, not disability, that counts.”

She had just won individual gold at the Alltech FEI World Equestrian Games™ 2010 when she picked up her first FEI Against All Odds award, given to the person who has pursued their equestrian ambitions despite a physical handicap or extremely difficult personal circumstances.

Dr Trabert, an anaesthetist by profession, was inspired to be an athlete and coach in the years after tragically losing her long-time partner in 2005. She has won six Paralympic medals and four at the FEI World Equestrian Games™. She is also the current Para Athlete representative on the FEI Athletes’ Committee and a member of the FEI Para Equestrian Committee.

“I feel this is an award and a reward for the work I’ve been doing and what I feel is important for our sport,” Angelika Trabert said. “You should always look on the positive side, especially in these times. It’s very hard for a lot of people and it counts more than ever to look upon the possibilities and abilities that we have. And there are many.”

“Our global and diverse community is built on our shared passion for horsemanship and the team spirit, which is so present in all five of our winners, is replicated around the world and at every level of the sport, both on and off the field,” FEI President Ingmar De Vos said.

“Passion and resilience define our community, and these values are echoed in the stories of each of our FEI Awards winners for 2020. Congratulations to all the nominees and especially to our winners, thank you for your commitment to the sport and the values which make the equestrian world so rewarding and inspiring.”

Full information on the FEI Awards 2020 and past winners are available here.