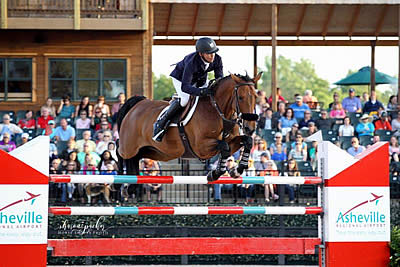 Mill Spring, NC – May 7, 2016 – Kent Farrington (USA) piloted the talented Gazelle to another FEI victory at Tryon International Equestrian Center (TIEC), as the pair finished atop the leaderboard in the $130,000 Asheville Regional Airport Grand Prix CSI 3* in front of a large crowd of spectators. Farrington and Gazelle demonstrated their efficiency, finishing the short course in 37.367 seconds. Fernando Cardenas (COL) and Quincy Car rode to second place with a time of 39.801 seconds, while Frances Land (USA) and For Edition earned third, crossing through the timers in 39.801 seconds.

The class saw 27 entries test the first round of the class, which was set by Manuel Esparza of Mexico. Seven combinations moved forward to the jump-off round, with only four earning double clear efforts on evening under the lights.

Farrington and Gazelle, who also took top honors in the $35,000 FEI 1.50m Suncast® Welcome on Thursday, found their rhythm early in the first round, tackling the track seamlessly. Farrington stated earlier in the week that the 2006 Belgian Warmblood mare (Kashmir van Schuttershof x Diva ‘Ter Elsen’), who he owns with Robin Parsky, is quickly learning the ropes of the larger classes.

“She’s jumped under the lights a few times and I try to take a lot of my horses and get them experience early on so that they’re used to crowds and larger atmospheres,” said Farrington. “I’m fortunate to have a great team of supporters behind me so that I can go to some of the best shows in the world.”

Saturday’s course found both seasoned competitors and talented amateurs tackling the track, and was designed particularly with that in mind, according to Farrington. He explained, “When you have a field like this, it’s kind of a mixed bag of horses and riders. He had to be clever with how he designed the course so that he has a good competition without giving it away. You also can’t make it too challenging that it over faces the younger horses and riders.”

“I thought that he had a good balance tonight. There’s always the element of a night class and a crowd for both young horses and riders that is a factor, other than just the course alone. I think that was a fair course for the field,” he continued.

While components of the track proved difficult for several pairs, including the Rolex triple combination and a spooky liverpool vertical, Gazelle handled each question on the course with ease. Slicing several fences on the jump-off track, the notoriously speedy Farrington sealed the win with nearly two seconds to spare.

“For me, it’s about measuring the class and feeling confident with what my horse can do and what that is going to mean on course. Samuel Parot is a very competitive rider and that horse is exceptionally fast,” he noted. “They went at the end of the class, so I had to do a faster plan that I would have liked. He’s won a bunch of World Cup Grand Prix classes on that horse and he’s never one not to count as a major competitor.”

“I tried to put enough pressure on him that he may have one down, which he did, so it worked out for us today,” he added.

Big plans lie ahead for Farrington, who was named to the Short List to represent Team USA on their quest for a medal at the 2016 Olympic Games in Rio de Janeiro, Brazil, later this summer. Farrington has grown into the one of the strongest riders for the United States and is looking forward to a competitive summer season.

“I’m going to Europe after this and we’ll be jumping in Rome, which will be our next big show. We have a few more that we will use as preparation as well. Hopefully the horses and riders stay healthy and I think we have a great chance in Rio.”