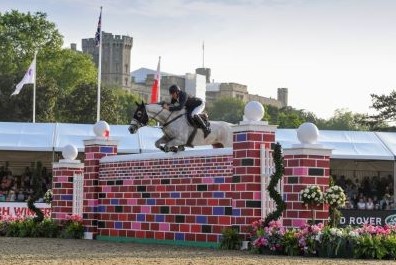 Royal Windsor Horse Show 2021 got off to a scintillating start with top-class national Show Jumping and Showing competitions and spectacular international displays. Amongst the highlights of the day was a ‘Stepping Up to Grand Prix’ Dressage Masterclass with Olympic rider, Richard Davison, and Olympic judge, Steven Clarke, who gave a valuable insight into how riders train at the highest level. With up-and-coming Grand Prix riders, including Jess Dunn, Sarah Higgins, and Gillian Davison in the saddle, the experts demonstrated the techniques used when training for a Grand Prix test, as well as explaining how to score the maximum points possible in the test itself.

The Puissance rounded off a spectacular day of national Show Jumping action in Windsor’s famous Castle Arena, with a duo of greys out-jumping their rivals in the five-round competition. From the six starters, four made it through to the fourth round to face the daunting 2.05m wall. However, with both Robert Whitaker and Shane Breen failing to clear the wall, it was left to Joseph Stockdale and Guy Williams to battle it out in the fifth round as the wall was raised to 2.10cm. Stockdale, riding the 11-year-old grey gelding Florida VDL, was first to guarantee his place at the top of the leaderboard; however, Williams, with the experienced Mr Blue Sky UK, made effortless work of the iconic wall to share the spoils.

Earlier in the day, The Martin Collins Enterprises National 1.40m Open Jumping Competition was a tight affair with less than a second splitting the top five placed riders. Ireland’s Shane Breen, as first to go, set a competitive standard completing the second timed phase with a clear round in a time of 32.79 seconds, good enough for eventual fifth place. Jay Halim, riding Gentleman BD Riethandei, put on an excellent display of horsemanship to temporarily take the lead posting a time of 32.21; however, it was Britain’s leading lady rider, Laura Renwick, who came out on top, taking the tightest lines to post a winning time of 31.85 aboard her nine-year-old mare, Haitske.

Ronnie Jones went one better than his 2019 finish to take victory in The Walwyn Novice Jumping Championship. Riding Kaleche, Ronnie was the fastest of just three double clears, finishing ahead of Adam Whiteway and Katie Speller, who took second and third, respectively.

Another home-producer, Shropshire-based Lucy Lockwood, landed one of the hardest-fought titles when she claimed the Amateur Hunter Championship with Chantilly Bojangles, formerly a successful small campaigner for Robert Walker, but now contesting lightweight classes with great success in Lucy’s hands. Reserve went to Suffolk-based farmer’s wife and mother-of-two Cerys Ford, another to land a first Royal Windsor win. She scored in the Middle/Heavyweight division with Rebecca James’s home-produced Alis Real Bright Spark, an eight-year-old in his first season.

The Working Hunter title — fought out this year in the Castle Arena for the first time, to the delight of both riders and spectators — fell to Royal Windsor newcomer Kelly Ward and Cheryl Farrow’s in-form lightweight Bloomfields Incognito, who are already through to this year’s Horse of the Year Show.