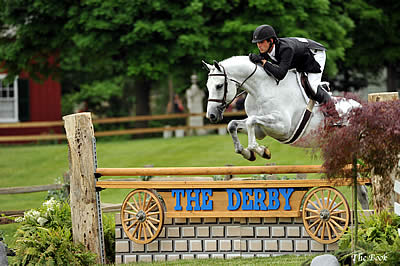 Coluccio and Fabled bested a field of the nation’s leading hunter horses and riders to win the $35,000 USHJA International Derby at The Derby at the Genesee Country Village & Museum, a brand-new, stand-alone hunter derby event that is already receiving rave reviews across the board.

“Everything was great here today,” said eventual winner Coluccio said. “The course was great; the people are great, and this place is beautiful. I had a good time here.”

Sharing that sentiment was nearby Buffalo, NY resident and acclaimed hunter rider Jennifer Alfano. Alfano shot to the top of the leaderboard in the first round with a beautiful trip aboard her well-known derby mount, Jersey Boy, owned by SBS Farms.

Coluccio and Fabled, owned by Larry Glefke, sat close behind Alfano and Jersey Boy going back for the handy round in the second place spot. Rounding out the top five heading in to the second round were Jennifer Jones riding Redfield Farm’s Countdown and Farmer in both the fourth and fifth place positions with Taken and Unspoken, respectively.

Farmer also sat in the eleventh and seventh place positions with Mindful and So To Speak.

With both Mindful and So To Speak, Farmer utilized what has become her signature bold handiness in a successful effort to climb up the ranks.

The beautiful Bobby Murphy designed handy course opened with a hand gallop to an oxer at the far end of the ring from the in-gate and presented a number of handy options across the field, all of which Farmer executed flawlessly with both Mindful and So To Speak. Mindful’s handy round score would be the second highest of the day only behind So To Speak’s, shooting Mindful from eleventh to fifth and So To Speak from seventh all the way up to second.

Of the initial top three, Jones and Countdown were the first to come back, but an unfortunate three refusals dropped them out of the top ribbon contention.

Coluccio and Fabled were next, and watching their round it is unlikely that any of the numerous spectators surrounding the field would ever have guessed that the talented gelding is only a 7-year-old, First Year Green horse.

“He’s a baby. He’s been shown in maybe seven shows as a hunter,” Coluccio explained. “I really haven’t asked anything like this from him yet.”

That inexperience factored in to how Coluccio rode the first round, electing to forego all but one of the high option fences.

“A lot of people can make mistakes with the high options so I thought let’s take out that variable and just give him a nice round and then go from there,” Coluccio said.

Following a successful first round, and with Alfano coming back after him in the second round, Coluccio took a different approach to the handy phase, taking all four high option fences and a tight, handy route between fences. His efforts earned him scores from the two judging panels of 87 and 88. Those scores coupled with handiness and high option bonuses and their first round total gave Colucci and Fabled an overall, cumulative total of 370.

Hometown favorites and front runners Alfano and Jersey Boy came close to victory, but their final overall score of 361 would put them in third in the final standings and would clinch the win for Coluccio and Fabled.

“He couldn’t have been better,” Coluccio said of Fabled. “He has so much ability. He tries so hard. He wants to do it right; he’s just figuring it out as he’s going sometimes. He’s so easy about everything.”

Coluccio began riding for Glefke and Lane Change Farm at the beginning of the year, and the entire Lane Change Farm team looks forward to returning to The Derby at the Genesee Country Village & Museum next year.

With an extremely successful first year of great competition and great attendance in the books, The Derby at the Genesee Country Village & Museum team looks forward to continuing the event next year.

To learn more about The Derby visit www.thederby.us or find more photos and information on Facebook here!

Supporting The Derby is the perfect way to enjoy a fabulous day with friends, clients or colleagues, all while helping others and gaining valuable marketing and exposure!

To learn more about the numerous available sponsorship opportunities, click here or contact us online for more information!