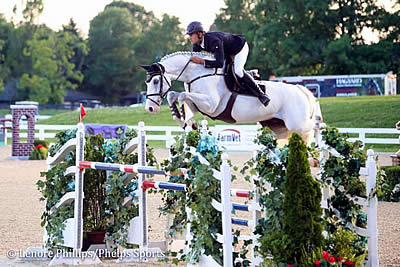 Lexington, Ky. – May 18, 2017 – The atmosphere at the Kentucky Horse Park was electric on Friday night as fans came out to watch the $35,000 Hagyard Lexington Classic CSI3* as part of the Kentucky Spring Classic Horse Show. Sixty-four riders competed their horses for a chance to not only win the 1.45m class, but also earn valuable points towards winning the Hagyard Challenge Series. Eugenio Garza, of Mexico, was victorious aboard Armani SL Z even though Roberto Teran of Colombia and Il Rubacuori held a seemly unbeatable lead until the very end. Santiago Lambre and Dingeman finished in a close third place.

Armani SL Z, a 9-year-old Zangersheide gelding, has been a part of Garza’s program for three years. Garza, who is trained by the famed Irish rider and coach, Eddie Macken, has been careful to bring the striking grey gelding along thoughtfully, in hopes of achieving the moment that came in the ring tonight. The class saw very few clear rounds in the first half of competition, but by the time Garza had entered the ring, eleven other riders were waiting to come back in the jump-off. Aaron Vale, of Ocala, Fla., had even qualified all three of his rides for the short course.

Teran was the first rider to produce a clear first round on Il Rubacuori and he came back for the short course, ready to win. Internationally recognized as a fast rider, he clocked in a time of 40.29. Santiago Lambre, also of Mexico, came the closest by producing a clear round in 40.570. While Garza was schooling for the jump off, he could hear the cheers and gasps from the crowd in the Rolex Stadium and knew that he would have to put in an incredibly fast round to overcome Teran’s early lead. Armani SL Z performed like a Grand Prix veteran and crossed the times in 39.330, giving Garza the definitive win.

Not only did Garza go home with the commemorative cooler and blue ribbon, but he also earned valuable points towards the Hagyard Challenge Series. The series consists of seven grand prix classes that are held during the 2017 show series at the Kentucky Horse Park. Following the final event, a cash prize of $50,000 will be awarded to the rider accumulating the most points throughout the series. Garza is now tied with Eve Jobs, who won the $35,000 Hagyard Lexington Classic during the Kentucky Spring Horse Show.

Sponsored by Visse Wedell of Wedell Real Estate, the Grand Open Hunter Championship is awarded to the combination that receives the highest number of points in their respective division. Posing the greatest competition for Goguen’s chance at the title was Kelley Farmer who had top placings with Discretion in the Conformation Hunter and It’s Me in the Green Hunter 3’9.

Goguen and Belhaven Stables, LLC’s Expression Z both stood out and received praise from respected hunter judges Rob Bielefeild and Shane George for their consistency in the High Performance and Green Hunter 3’6 during the Kentucky Spring Classic. The pair produced memorable and beautiful performances in each round, capturing top honors throughout both divisions.

Goguen of Lexington, Kentucky has earned continual success in the hunter ring, particularly excelling in the High Performance Working Hunter division. Professional hunter riders will take to the Stonelea ring once again this Saturday for the greatly anticipated USHJA National Hunter Derby, the highlight of the week.