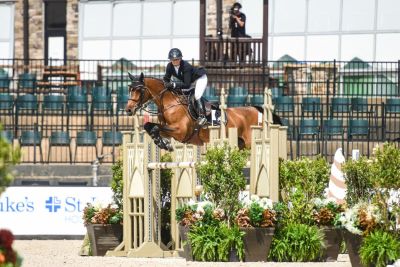 The Nick Granat (USA) course design welcomed 59 entries in the first round, with ten pairs qualifying for the jump-off round. Ballard and the 2012 Norwegian Warmblood mare owned by Ilan Ferder took a crack at Ashlee Bond’s leading time and caught them on the last line of the track, Ballard assessed.

“Following Ashlee is not so easy, and the only place where I felt like she gave me a window of opportunity was the last line. She cut into the vertical, and ended up being wide and did eight [up the last line]. I really had no choice – I had to get there in seven [strides]. Even from the beginning, Penny was quite handy – it was just one of those days where everything went the way it was supposed to go.”

Forty-eight entries navigated the power phase of the track set by Nick Granat (USA), with 22 horse-and-rider pairs continuing on to the speed phase of the course. Ballard is newly paired with the 2012 Brazilian Sport Horse mare (Indoctro x Lucky Electra Xango) owned by Ilan Ferder, and revealed that their winning ride in Tryon Stadium was actually their first competition together.

“That was my first class with her! I love her,” Ballard elaborated. “She goes the way that I like to ride, and I really believe in her. She really went out there today from start to finish.”

While Ballard acknowledged that many riders were using the Power & Speed Stake as a training opportunity, she wanted to go for the win with “Electra,” choosing to take a more conservative approach with some of her other horses. “There were a lot of people who were training in that class. When we walked the course, we made a plan for the horses that we were training. I said, ‘Electra, we’re going for the win,’ and she went for the win.”

The course not only suited her horse, Ballard reported, but she thought that it was a great way to kick off the first day of FEI competition at TIEC, initiating the first week of international jumping competition of the season.

“I liked the course. It was a very fair start for a two-star. Sometimes, the lines are blurred between two, three, four, and five, so I think that it was a really nice introduction to the two-star.” Ballard concluded, “A lot of these horses haven’t had a lot of exposure [to different environments], as they’ve been in Wellington for most of the winter, so it’s a positive start for the horses at this level, and we hope to have a good rest of the week.”