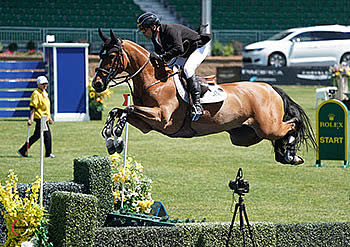 Forty-one of the world’s top show jumping athletes tackled the technical track set by Canadian course designer Michel Vaillancourt in the Meadows on the Green ring.  Seven riders, including three Olympic gold medalists, delivered clear rounds to set the stage for what would prove to be a thrilling jump-off.

2012 Olympic Champion and current number one rider in the world, Steve Guerdat of Switzerland, was the first to return for the jump-off.  He set the early pace, turning in a clear performance in a time of 38.68 seconds riding Venard de Cerisy.  Speed demon Kent Farrington, a member of the U.S. silver medal team at the 2016 Rio Olympics, was up next with Creedance.  His time of 38.73 seconds was close, but not close enough, and would leave him fourth in the final standings.

Lamaze and Fine Lady 5, a 16-year-old Hanoverian mare (Forsyth x Drosselklang II) owned by Artisan Farms LLC and his Torrey Pines Stable, sped around the track in a time of 38.65 seconds to move to the top of the leaderboard.  When two-time Olympic team gold medalist Beezie Madden pulled a rail with Darry Lou, all eyes turned to Canada’s Mario Deslauriers and Amsterdam 27.  The 1984 World Cup champion took his best shot, coming home in 38.67 seconds, just two hundredths of a second behind Lamaze and one hundredth of a second in front of Guerdat.  It was all up to the final challenger, Germany’s Philipp Weishaupt.  Riding CHE Fantastica, Weishaupt crossed the timers in 38.78 seconds.  While seemingly close to Lamaze’s winning time of 38.65 seconds, it would only land him fifth in the final standings.

“I have never seen an event where the riders were this close,” remarked Vaillancourt, the only Canadian show jumping athlete other than Lamaze to have won an individual Olympic medal, claiming silver at the 1976 Montreal Olympics.

“It was a great jump-off; everybody in there knows how to go fast!” said Lamaze, 51. “Anyone could have won today but my horse seems to jump the lowest in the air; she just skimmed the last fence.  She jumps quite flat and lands carrying the speed.  Some horses are more agile than others at being able to go fast, and it sure makes our lives easier.  My horse deserves a lot of the credit.”

Despite her winning form, Lamaze is already thinking ahead to Fine Lady 5’s future.

“She’s 16 this year, and she’s been an incredible horse for me,” said Lamaze of his Olympic individual bronze medal partner at the 2016 Rio Olympics.  “It’s hard to think retirement when you see her jumping like this, but I want to leave with her winning and feeling great about the sport.  She deserves it.”

Earlier in the week, Lamaze and Fine Lady 5 finished second to Farrington and Creedance in the Scotiabank Cup on Friday night, June 14.  At last week’s CSI5* ‘National’ tournament, the pair topped a 14-horse jump-off to win the PwC Cup on Thursday, June 6.

Lamaze is the all-time leading money winner at Spruce Meadows with more than $6 million in career earnings.  For more information on Eric Lamaze and his Torrey Pines Stable, visit www.ericlamaze.com.