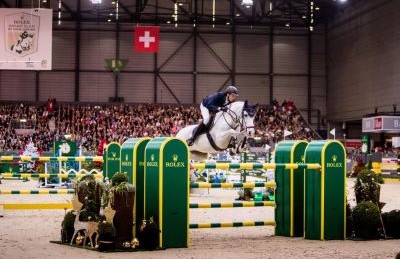 The partnership between Rolex and the Geneva International Horse Show was established in 1996, with 2021 marking the 25-year anniversary, and remains a key element of the brand’s long-standing commitment to equestrianism that dates back more than 60 years. Inaugurated in 1926, the event is among the most revered on the equestrian calendar, demonstrating an unwavering dedication to continuous improvement and quality that fits perfectly with Rolex’s own pursuit of perpetual excellence.

The competition will culminate on Sunday with the Rolex Grand Prix, one of the four Majors that form the Rolex Grand Slam of Show Jumping. As ever, it will be a showcase of the precision, bravery, and athleticism required by horse and rider, working in harmony to take on the challenge set by world-renowned course designers Gérard Lachat of Switzerland and Louis Konickx of the Netherlands.

The Rolex Grand Slam of Show Jumping, comprising The Dutch Masters, the CSIO Spruce Meadows ‘Masters’ Tournament, the CHIO Aachen, and the CHI Geneva, was initiated in 2013 and rewards a rider who wins three consecutive Grands Prix at these events. The most coveted prize in show jumping, it has been achieved by only one athlete, Scott Brash of Great Britain, whose epic feat began at Geneva in 2014 and was completed with victories at Aachen and Spruce Meadows in 2015.

Germany’s Daniel Deusser heads to Geneva as the current live contender for the Rolex Grand Slam following his exceptional performance at Aachen in September, taking victory aboard Killer Queen VDM.

THE ROLEX FAMILY OF TESTIMONEES

A strong roster of Rolex Testimonees will challenge Deusser for the Rolex Grand Prix title. Leading the way will be home favourites Martin Fuchs and Steve Guerdat.

Fuchs will be hoping to retain his crown following a successful year that has included team gold and individual silver medals at the European championships. The Swiss World No. 4 said: “CHI Geneva is particularly special for me as it’s my home Major and a show that I always want to do well at. Winning the Rolex Grand Prix in 2019 was an unbelievable feeling and I will be doing my very best to repeat my performance.”

Guerdat is a three-time winner (2006, 2013, and 2015) of the CHI Geneva Rolex Grand Prix, and was also victorious in the 2010 and 2018 Rolex IJRC Top 10 Finals. He heads to Palexpo with the prospect of securing a Rolex Grand Slam bonus after winning the CP ‘International’ at the CSIO Spruce Meadows ‘Masters’ earlier this year.

Brash, currently ranked No. 6 in the world, also understands the accuracy, courage, and determination required to win a Major, as does Kent Farrington, winner of this event in 2017 with his brilliant mare, Gazelle. France’s Kevin Staut and Brazil’s Rodrigo Pessoa join the roll of former winners looking to reclaim the title, while Ireland’s Bertram Allen and Great Britain’s Harry Charles will be seeking to add their names to this illustrious list.

In the Rolex IJRC Top 10 Final, the world’s top 10 ranked riders compete against each other for the right to be crowned champion. The unique event, which in 2021 celebrates its 20th anniversary, has been supported by Rolex since its inauguration, and acknowledges the achievements of the best show jumpers over the course of the season.

Farrington will contest the 2021 edition as reigning champion, having ridden Austria 2 to victory in 2019. His second success – the American also triumphed in 2015 – marked the seventh consecutive win for a Rolex Testimonee in the event. He will be up against a strong contingent of in-form riders, including Deusser, Fuchs, Brash, Guerdat, and Staut.

IJRC Director Eleonora Ottaviani commented: “We are extremely proud to support this unique concept, bringing together the best riders in the world each year. As with the Nitto ATP Finals in tennis, the Top 10 Final is unparalleled in equestrian sport, producing the finest level of competition from the world’s best athletes. In 2021 we mark the 20th anniversary of the event, a testament to its long-standing success, made possible through the partnership with Rolex, a brand that has demonstrated a continuous and invaluable commitment to equestrianism for more than 60 years.”