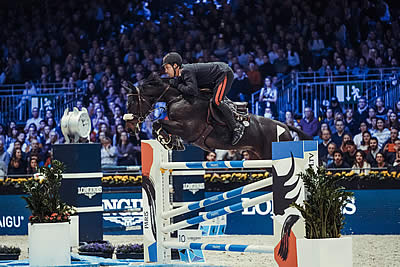 This amazing pair boasts a fabulous total of sixty plus international wins over the past five years, twelve of which in 2019! Emanuele Gaudiano and Carlotta 232 confirmed their status when they won the much acclaimed 2019 Speed Challenge of Paris in a super time of 60’’48 without a single pole down: a repeat for the winners of the same flagship competition during the Longines Masters of Lausanne, Switzerland this summer. “I’m extremely lucky to ride such an amazing mare. Each round with her is a pleasure – even more so at a show like this one where the stands are packed,” he commented.

The Paris crowd was held spellbound throughout the aptly named Longines Speed Challenge, the fastest class in the world. The spectators who supported each rider unreservedly were treated to the most spectacular show. The special table where one pole down is worth 2 seconds extra time goes toward an increased speed and more suspense.

However, a clear round was definitely a bonus to score the best time to win the class. A goal reached among others by world n°1 Steve Guerdat (Switzerland). Number 13 out of 27 to go, the 2012 Olympic champion set a very fast pace in 61’’98 aboard Ulysse des Forêts. “I rode according to my plan and mostly took advantage of my mare’s natural speed without pushing much,” the rider commented. Enough to win? “I think it’s possible to be faster. If I finish in the top five, or even on the podium, it’ll be a good thing.” He ends up a very creditable third, behind Emanuele Gaudiano and his long- standing friend, Canada’s Eric Lamaze. Riding top mare Fine Lady 5, the 2008 Olympic champion also put down a top performance thanks to a time of 61’’37 at the very end of the class. A lesson in riding and courage greeted by all.

Best of the French is none other than Roger-Yves Bost, a.k.a. “Bosty the Rocket”, who gave it his all with Castleforbes Talitha to finish fourth 62’’22.