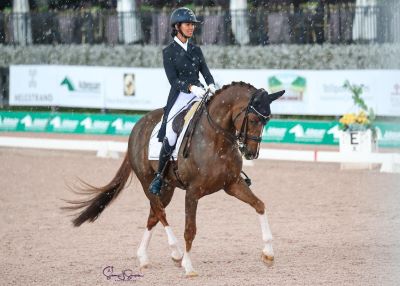 Friday’s win marks Quintessential’s first blue ribbon. While the eight-year-old has earned some other big scores this season, his 69.264% in the FEI Prix St. Georges class was enough to come out ahead of the 13-horse field.

Kevin Kohmann has had the ride on Five Star for two years. Last year they had an extremely successful season and won numerous classes, but this year Kohmann has kept Five Star under wraps to finish training for the grand prix level.

“He is the smartest horse I have ever worked with. He’s such a gentleman that he’s able to go in the ring both for me and his owner, Olga Hartsock,” remarked Kohmann of the 12-year-old KWPN stallion by Amazing Sea x Jazz.

For Five Star’s first appearance this year, Kohmann was pleased with their score of 70.587% in the FEI Intermediate II.

In Friday’s FEI Grand Prix Class, Jennifer Williams (USA) piloted Quarterline (Quarterline x Sir Donnerhall I) to 71.032% to top the leaderboard of seven other competitors. Oded Shimoni’s 12-year-old Oldenburg gelding’s test got stronger as it went, scoring eights from both judges in the changes, as well as picking up eights in the pirouettes.

Second place went to Roxanne Christenson (USA), who rode her own San Sation, a 10-year-old Oldenburg gelding by San City x Baroncelli, to an overall percentage of 68.804%, scoring eights in the canter tour.

Sunday’s FEI Intermediate II class saw Natalie Pai (USA) victorious with Melanie Pai’s Utopie D’Ouilly (Quite Easy x Narcos II). Pai’s test with the 14-year-old Selle Français mare was also one that improved throughout, notching several eights in the second half to finish just under 70% at 69.999%.

It was the second blue ribbon in as many days for Pai, who also was the winner of Saturday’s FEI or Equivalent Test of Choice with Inspiration PF (nine-year-old KWPN gelding by Everdale x Calido I) for their USEF FEI Prix St. Georges test scoring 65.661%.