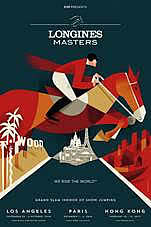 One of the most prestigious equestrian events in the world, the Longines Masters Series attracts each year the best horses and riders on the planet. The unique event concept is a celebration of the best of the sport of Show Jumping and entertainment for passionate equestrians, horse lovers and all those who enjoy a unique lifestyle experience.

EEM, creator, owner and organizer of this prestigious series, continues their quest for excellence, innovation and the reinvention of Show Jumping.  Christophe Ameeuw, Founder and CEO of EEM: “I have always had an obsession with wanting to communicate my passion for this sport.  With this new Season, thanks to Title Partner and Official Timekeeper Swiss watch-maker Longines, we begin our intercontinental journey to meet new audiences around the world, a step closer in the realization of my dream to ‘Ride the World’ and bring Show Jumping into the international spotlight.”

Long Beach Mayor Robert Garcia said, “The Longines Masters of Los Angeles is one of the most prestigious equestrian events in the world, and the City of Long Beach is proud to host the American leg of the series. Long Beach offers a unique blend of urban sophistication and beach city charm. Our downtown waterfront Arena is a perfect setting for both riders and spectators, with hotels, shopping, entertainment and 125 quality restaurants just steps away.”

A driving force behind the sport, EEM raises the bar even higher and announces a NEW unprecedented bonus for its Grand Slam Indoor, Show jumping’s ultimate sporting challenge.

Inspired by the famous Grand Slam in tennis, and officially recognized by the FEI, the new “Grand Slam Indoor of Show Jumping” reaches new heights as the best horses and riders of the planet will attempt to win the American, European and Asian legs of the Longines Masters.  These are accomplishments that will mark the life of an athlete; the rider who achieves this will be not only enter into legend of the Longines Masters but also the entire sport.

With total potential prize earnings of up to 4,500,000€, this new intercontinental challenge thus raises EEM and its “Grand Slam Indoor of Show Jumping” to the ranks of legendary sporting events such as the Ryder Cup for golf, the Grand Slam for tennis and the America’s Cup for sailing.

EEM presents « We Ride the World »™ – The Journey to Excellence

Said Christophe Ameeuw, “If equestrian sports are a matter of taste, there is still a consensus that no one can question: the beauty of the horse transcends the sportive exploit, and beyond the extraordinary performance of the riders, conveys a feeling of wonder.

A New Artist for the Season Two

For the 2nd season in a row, Bruno Danto, EEM’s Creative Director, entrusted the image for this season to young and talented Italian artist Riccardo Guasco. Danto comments, “I wanted to present a distinctive image and identifiable style for the Longines Masters and initiated the collaboration with up and coming artist to interpret each Season Posters.  With a bit of nostalgia, these images remind me of the covers of The New Yorker, where the best illustrators of the world capture life with a rare eye and elegance.” Guasco, who works as both painter and illustrator and now resides in Wales, created the new collection adding touches of cubism and hints at each urban setting. The posters speak to the reputation of each individual Longines Masters while also illustrating its core concept, “We Ride the World.”

To take part in the Longines Masters “We Ride the World” journey, register online for all three events at www.longinesmasters.com/en.