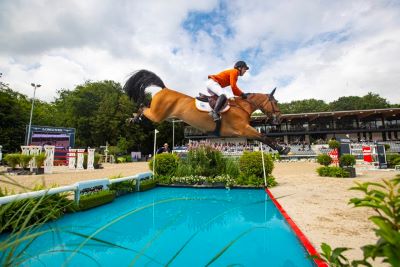 In the presence of the former Queen of the Netherlands, Princess Beatrix, Rob Ehrens’ Dutch team did themselves proud when coming out on top in the Longines FEI Jumping Nations Cup™ in Rotterdam (NED).

There was a super-sharp edge to this fourth and last leg of the 2021 series as the 10 teams took on the 12-fence track set by Tokyo 2020 Olympic Games course designer Santiago Varela. Just three days ahead of the Olympic Definite Entries deadline, every rider was out to impress, and it was the home side that proved most equal to the challenge.

A final tally of seven faults gave Maikel van der Vleuten (Beauville Z), Willem Greve (Zypria S NOP), Marc Houtzager (Sterrehof’s Dante NOP), and Frank Schuttert (Lyonel D) a narrow victory over Swedish runners-up Douglas Lindelow, Angelie von Essen, Rolf-Goran Bengtsson, and Peder Fredricson who completed with nine faults on the board. It was only a foot in the open water for Fredricson’s Catch Me Not S that prevented the Swedes from making it a double in this year’s shortened series following their win at the opening leg at St Gallen, Switzerland just four weeks ago.

France pipped Germany for third place when combined times separated the two teams that finished on 12 faults apiece, while Ireland was close behind in fifth with 13. And the Tokyo Olympic hosts from Japan gave a great account of themselves. Reduced to a three-man side when Taizo Sugitani withdrew before the competition began, Daisuke Fukushima, Koki Saito, and Eiken Sato racked up just 14 faults for sixth place, and Sato and his fabulous Saphy des Lacs produced one of the five double-clear rounds posted on the day.

It was a close-run thing at the halfway stage when France, Sweden, Germany, and the USA all shared the lead on a zero score, followed by Ireland and the eventual Dutch winners carrying just a single time penalty each.

But when the course was raised and the fences widened for the second round, and the evening light drew long shadows across the arena, then the competition took on a completely different complexion.

The Americans lost their grip when Beezie Madden withdrew and they had to count 16 faults, while the Germans and French also slipped when adding 12 to their scorelines.

French pathfinders Penelope Leprevost and GFE Excalibur de la Tour Vidal produced a superb double-clear and it seemed possible their side might stay in front if anchorman Kevin Staut could bring Visconti du Telman home clear for a second time. But the pair was one of many to fault at the open water in the fading light and when they also lowered the oxer at fence seven, then that had to be added to the four picked up by Gregory Cottard’s mare Bibici who, also like many before her, clipped the oxer at the end of the penultimate line this time out.

The Dutch also kicked off the second round with a double-clear from Van der Vleuten, and when Greve added just a single time fault to his first-round foot-perfect run, then they began to look strong. Houtzager and Sterrehof’s Dante faulted at the narrow vertical at fence 10 and also collected a time fault, and when Schuttert’s Lyonel D racked up the discard score of 12 faults, then they had to add six second-round faults to the single first-round time penalty for a total of seven.

As Sweden’s Peder Fredricson set off it seemed that might not be good enough. Because a clear from the World No. 7 would mean one of the four-fault results racked up by Lindelow and Von Essen could be dropped, because Bengtsson and the hugely impressive Ermindo W, who clinched that St Gallen win in a thrilling jump-off, had collected just a single second-round time fault, so they could finish with just five faults in the final analysis.

But Catch Me Not S put a foot in the water in an otherwise effortless round, so it would a Dutch celebration.

Talking after the prizegiving, Van der Vleuten pointed out, “A water jump is always difficult, but I was happy with my horse because he jumped it nice and stretched well over it both times today.”

He was really pleased with the 11-year-old Beauville Z. “He jumped fresh and it’s always nice to be double-clear. He jumped even easier in the second round.”

Talking about the increased level of faults in the second half of the competition, he said, “We started late (17.00 local time) so the shadows were maybe a factor, but also the course was bigger – the middle of the combination (fence 8) was taller and the triple bar (fence 9) went up one hole and was 10cms wider, and the next vertical went up and the last oxer was wider too – all that makes a big difference.”

Chef d’Equipe Rob Ehrens said he hadn’t had much sleep. The Dutch last won in Rotterdam in 2016, but they were waiting a long time for that to happen.

Meanwhile, Ehrens has to be feeling positive after this great result because, as Varela added, “This was a perfect Nations Cup to get a good feeling before the Olympic Games.”

The Dutch should indeed be feeling good not just about Tokyo, but also about their chances at the Longines FEI Jumping Nations Cup™ Final 2021 which will take place in Barcelona (ESP) in October where all 10 teams from Division 1 will be eligible to compete.