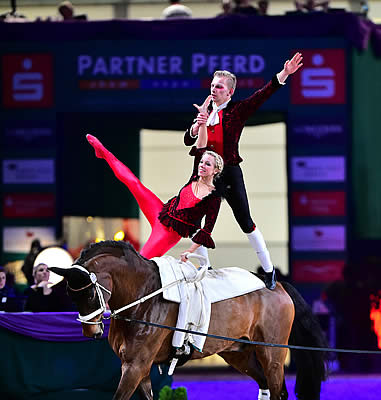 Germany’s Pia Engelberty and Torben Jacobs were clear winners of the Pas-de Deux competition at the fifth and last qualifying round of the FEI World Cup™ Vaulting 2015/2016 series in Leipzig, Germany. (FEI/Daniel Kaiser)

Leipzig (GER), 16 January 2016 – Reigning European Champion, Jannis Drewell, made it a back-to-back hat-trick of wins when topping the Individual Male competition at the final qualifying leg of the FEI World Cup™ Vaulting 2015/2016 series on home ground in Leipzig, Germany. And Switzerland’s Simone Jäiser also stamped her authority all over the Individual Female category, with big scores securing her third success of the season.

In the Pas-de-Deux, Germany’s Pia Engelberty and Torben Jacobs reigned supreme as today’s top placings reflected precisely those achieved at the penultimate leg at Mechelen in Belgium three weeks ago. The stage is set for a thrilling final, the details of which are expected to be announced during the coming week.

Jäiser was on fire from the outset, earning a maximum artistic score of 10 from judge at C, Germany’s Jochen Schilffarth, in yesterday’s first round. Technical judges Rob de Bruin from The Netherlands and Germany’s Helma Schwarzmann also awarded impressive marks of 9.222 and 9.388 respectively to put the result beyond doubt. And today the Swiss athlete did it again, posting a mark of 8.871 to leave her on a final tally of 8.947 for a clear victory.

Germany’s Kristina Boe was runner-up on both days, while fellow-countrywoman Corinna Knauf nudged French contender, Marin Mohar, out of third place in the final analysis with a powerful performance this evening. Mohar had to settle for fourth ahead of Austria’s Yvonne Oetti in fifth, while Germany’s Regina Burgmayr filled sixth and last place in the Female category.

Jäiser’s confidence has to be at an all-time high going into the forthcoming final. Runner-up at last year’s finale and with wins at the opening leg of the current series in Madrid (ESP), at Mechelen last month and again today, she is right on top of her game. She has adjusted well to the extension of the time allowed for the FEI World Cup™ Vaulting Freestyle this season. “It has to be 20 seconds longer than for the Europeans, so we have to lengthen our programmes,” she explained. “In the beginning of the winter I felt very confident with the first part of my Freestyle, because that was the same as before and I knew it very well. However, with the additional 20 seconds I felt a bit unsure at first, but now I feel very relaxed and comfortable with the whole programme, and I just enjoy performing it!” she added.

Former World and European champion, Switzerland’s Patric Looser, had a busy day today, lunging two of the nine contenders in the Individual Male competition as well as the Pas-de-Deux winners. But it was Simone Drewell, mother of Jannis Drewell who took the sport by storm last summer with his sensational performances at the FEI European Championships in Aachen, Germany who lunged her son to victory in the Individual Male class aboard the family favourite, Diabolus.

The 24-year-old vaulter, who holds the no. 1 spot in his sport’s rankings, produced the only score over 9 in yesterday’s first round in which German riders filled the top four places. Erik Oese lined up second ahead of Daniel Kaiser in third and Viktor Brusewitz in fourth, and although Kaiser was overtaken by Brusewitz in today’s competition he still managed to hold onto third place overall.

Horse scores, as always, were vitally important, and the 14-year-old chestnut gelding, Down Under, was awarded first place in both rounds by judge at A, Germany’s Helma Schwarzmann. Lunged by Andreas Bäßle, the Hannoverian yesterday claimed top marks with Kaiser and was judged second-best during Oese’s runner-up performance, while today the situation was reversed. Drewell’s Diabolus was third-best yesterday and finished fourth today, but his human partner was in a class of his own on both occasions. Drewell’s energy-filled programme earned scores of 9.056, 9.635 and 9.287 for a total of 8.885 today, and that brought his overall total up to a massive 8.969, with Oese finishing on 8.585 and Kaiser taking third with 8.386.

Although his exceptional talent has taken him to the very top, Drewell was quick to attribute much of his success to his mother and his horse. “Diabolus has been with us for eleven years now and he is part of the family – I have worked with him since the very beginning,” the vaulter explained. “And my trainer is my mother and so the three of us know each other very well which surely is part of our success. In Leipzig I had two very good rounds; I absolutely enjoyed myself and now I am very much looking forward to the World Cup final,” said the athlete who also topped the line-up at Salzburg (AUT) and at Mechelen (BEL) last month.

Any chance Erika di Forti and Lorenzo Lupacchini might have had of overtaking the first-day winners Pia Engelberty and Torben Jacobs in the Pas-de-Deux were dashed when the Italian duo parted company with their horse, Little Louis. Lupacchini and di Forti have a distinctively balletic quality to their work, and their win at Salzburg was a little bit magical. But when they both slipped off while negotiating an early movement, the pair who finished fifth at last summer’s European Championships had to settle for a mark of 7.423, which left them a long way behind the German duo who also recorded an emphatic victory yesterday. The Italian pair made a great recovery, however, to still claim second place overall, and the grace and beauty of their partnership ensures they are a real force to be reckoned with.

There were five pairs in action, and the young French brother and sister, Simon and Lucie Chevrel, continued to show immense promise when lining up fourth overall behind Germany’s Jolina Ossenberg-Engels and Timo Gerdes. But Engelberty and Jacobs nailed the win with relative ease with the help of lunger Patric Looser and their horse, Danny Boy.

Jacobs pointed out that in this sport there is no room for error. “If you want to be successful in Vaulting nowadays you really have to perform your programme – everything has to be perfect: the music, the costumes and the performance itself. I sometimes look for hours, days, maybe even weeks to find the right music and thinking about the costumes. Last year we performed as Tarzan and Jane, but then we wanted to do something else but we wanted to stick to something mystic and a little bit bad!” he said with a laugh, “so we ended up with vampires!”

Engelberty says she is very lucky to have Jacobs as her vaulting partner. “He is very creative; he looks for the music. Of course, we then talk about it, but he invests a lot of time in searching for the right music. And he designs our costumes himself – I only have to say: ‘yes!’ or ‘no!’” she explained.