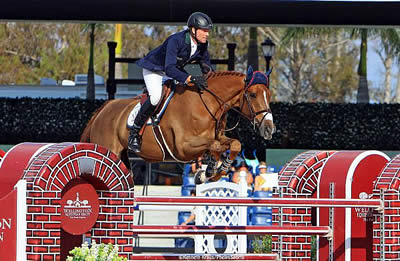 Lexington, KY – October 30, 2014 – The National Horse Show, now underway at the Kentucky Horse Park in Lexington, Kentucky, is proud to announce that Dover Saddlery has joined forces as the presenting sponsor of this year’s ASPCA Alfred B. Maclay National Championship which takes place as the concluding class on Sunday, November 2, 2014.

Dover Saddlery offers the finest selection of English riding apparel and tack for English riders at all levels and is well known for its vast inventory of equestrian products. Dover prides itself on its tack stores which are designed to evoke a premier horse barn and are beautifully merchandised with saddles, tack, apparel and horse care items.

In addition to the presenting sponsorship of the ASPCA Maclay National Championship, Dover is generously donating prizes for the always popular Barn Night, including a wheelbarrow full of barn supplies and two gift certificates.

Dover Saddlery’s Janet Nittman noted, “We wanted to take advantage of this excellent opportunity to be associated with a nationally renowned class. Dover Saddlery has been a long-time sponsor of the USHJA and of many equestrian events throughout the country,” she said. “Dover offers the widest selection of quality products for the hunter/jumper riders and it is very rewarding to sponsor and to meet many of our customers at the various shows. We look forward to being in Lexington for the Maclay.”

On Sunday history will come full circle as former Maclay winner Peter Wylde (1982) will award the trophy to the winner of the 2014 ASPCA Alfred. B. Maclay Championship. Wylde will be bestowing the honor on behalf of his longtime sponsor Dover Saddlery, first time sponsors of the Maclay at the National Horse Show this year.

Wylde won the Rolex-Maclay National Equitation Championship at the National Horse Show in Madison Square Garden in 1982. Like many of his peers who achieve the honor, Wylde chose a career as a professional rider and went on to represent the United States in international competition earning team and individual Silver medals at the Pan American Games in Winnipeg, Canada in 1999 as well as the Male Equestrian of the Year title from the United States Olympic Committee.

In 2002, Wylde and Fein Cera won the individual bronze medal at the World Equestrian Games in Jerez, Spain, where Fein Cera was awarded the coveted “Best Horse” honor. The pair was again chosen to represent the United States at the 2004 Olympic Games in Athens, where they helped the U.S. to win the team gold.

Wylde’s classic riding style has earned leading rider titles from some of the world’s finest horse shows including the Washington International Horse Show, the CSI-W Geneva, and the CSN Manheim. He has won the Style of Riding Awards at the CHIO Aachen, Germany; the CSI Vienna, Austria; at the American Gold Cup; and three times at the Hampton Classic.

Tickets for the 2014 National Horse Show are available at the Kentucky Horse Park.

The highlights for this year’s show include, on Thursday night, the Copernicus Stables, LLC $75,000 International Open Jumpers – Time First Jump Off. Friday night’s feature is the Chansonette Farm $45,000 Gambler’s Choice Top Score Costume Class in honor of Halloween night. On Saturday, it’s the main event, the $250,000 CP National Horse Show Grand Prix. On Sunday afternoon the National Horse Show plays host to the Maclay National Championship for the ASPCA Maclay Horsemanship Class Presented by Dover’s Saddlery beginning early in the morning and continuing with the final round at approximately 3:00 PM.