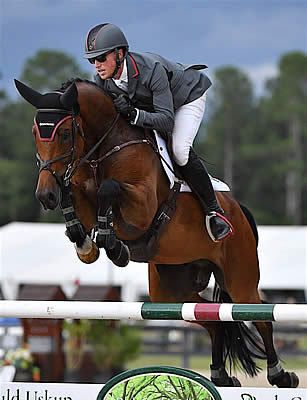 Of the twenty-seven entered, thirteen advanced to the jump off round with a time allowed of 48 seconds.

First to go in the jump off order was Doug Payne of Aiken, South Carolina and Wendy Luce’s Marshall M. Dillon. Their fault free round in a time of 37.732 seconds set the new time to beat.

Winner of the Week I $7,500 Welcome and the $25,000 Purina Animal Nutrition Grand Prix, Kim Farlinger of Wellington, Florida and Kindle Hill Afiliates’ Maharees Rock, followed Payne in the jump off order, but earned four jump faults at the first fence and finished with a time of 40.007 seconds which would finish them in ninth place overall.

Payne returned to the grand prix arena, this time in the irons of Jane Dudinsky’s Quintessance. Their fault-free round in 35.769 seconds took the lead.

“The horse [Quintessance] is a freak!” said Payne. “He’s just got athleticism, is quick and has the sharp mental state to tackle this. He was supposed to be an event horse, but I thought he would be more suited to the jumpers and it’s turned out well for him. The only thing he is lacking is experience. At this point he’s only 8 and his future looks really bright,” he added.

“The challenge in the jump off was that there we so many of us, you had to really go for it to get a ribbon,” he said. “What I did differently was I chose to do the 8 strides from fence 1 to 2 which let me turn over the oxer to the second jump. Everyone who did the seven made the turn more difficult. I took the time to set him up for a smooth rest of the course which paid off,” he said.

Megan Bennett of Raleigh, North Carolina aboard her own Sherlock Homes 21 followed Payne in the order, but four jump faults in a time of 41.188 seconds would see them finish in eleventh overall. Fandango, owned and ridden by Rachel Kennedy of Brookeville, Maryland, was up next. They also had four jump faults and with their time of 45.636 seconds, would settle into a twelfth place finish.

Adrian Jones of Shamong, New Jersey in the irons of Jamie Stryker’s Cavello joined the jump off bunch, but with four jump faults in a time of 39.994 seconds, they would finish in eighth place.

Kara Jones of Cornelius, North Carolina and her own End Game earned four jump faults in a time of 45.886 seconds and would finish in thirteenth position.

Daniel Geitner of Aiken, South Carolina and November Hill’s Vesta De Lavardin followed in the order. A four fault round in a time of 35.905 seconds would earn them the sixth place ribbon.

Laura Gaither Ulrich of Raleigh, North Carolina and Euro Equine Imports’ Garda posted a clear jump off round in a time of 41.581 seconds which was not enough to unseat Payne, but earned her a fifth place ribbon overall.

Chasen Boggio of Canton, Georgia aboard his own Co Pilot followed in the order with a clear jump off round in a time of 39.864 seconds, winning them a fourth place ribbon. Farlinger returned to the grand prix arena, this time in the irons of Keren Halperin’s Free Style. Their fault-free second round in a time of 36.083 seconds would move them to a second place finish and Killam and Boreale De Tala to a third place overall.

Killam and Empire show Stables’ Memory Lane were next to go but four jump faults in a time of 41.108 seconds would see them finish in tenth place overall.

Geitner and Dayna Gant’s Ghiradelli were in the desirable last to go position but four jump faults in a time of 36.130 seconds would see them finish in seventh place, moving Payne and Quintessance into the winner’s circle.

“He [Quintessence] is really is an exceptional horse and I’m lucky to have the opportunity to ride him so a big thank you to his owner Jane Dudinsky,” said Payne.

Payne has to do a final check before he competes in the Pan Am Games but will then be heading to the Charleston Summer Classic for Week I. “Charleston is the best. We stay at our friend’s place at the beach and we’re just a few minutes from the show. Our son is a year and half old and he’s all about it,” said Payne.