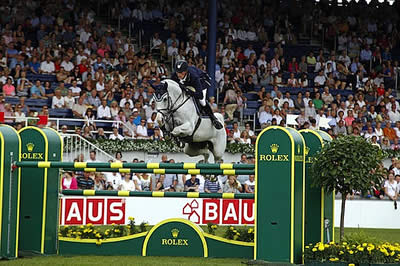 Wellington, FL – July 25, 2014 – The horses and riders of Double H Farm have had great success in the last few months competing on different continents around the world. Quentin Judge (USA) and McLain Ward (USA) had great wins at Spruce Meadows in Calgary, AB, Canada, while Daniel Deusser (GER) continued a fantastic summer in Europe, specifically excelling at the CHIO in Aachen, Germany. Ward also recently had a great win in Saugerties, NY.

Owned and operated by the Harrison family, Double H Farm has locations in Wellington, FL and Ridgefield, CT. With riders Quentin Judge, Cayce Harrison, McLain Ward, and Daniel Deusser, the horses of Double H Farm show at the best competitions around the world, and have made owner Hunter Harrison incredibly proud in 2014.

“The sport of show jumping can be extremely rewarding for an owner, and when great horses come together with great riders, the results speak for themselves,” Harrison stated. “I congratulate all of the horses and riders at Double H Farm on an amazing season so far. I am very proud of everyone, and I look forward to seeing how the rest of the year plays out.”

Continuing a phenomenal year as the reigning 2014 Longines FEI World Cup Champion and back-to-back German Champion (2013-2014), Daniel Deusser traveled to the world-renowned CHIO Aachen to compete in July. Deusser and Double H Farm and Stephex Stable’s Cornet d’Amour, an 11-year-old Westphalian gelding (Cornet Obolensky x Damiani), finished fourth in the prestigious €1,000,000 Rolex Grand Prix of Aachen. Deusser was then presented with the award for best performing rider of Aachen, taking home the prize of the Federal Minister of the Interior.

Along with Deusser’s success, Double H Farm congratulates Lauren Hough (USA) on her fifth place finish in the Grand Prix of Aachen riding Ohlala as well as her clear round contribution in the Nations Cup. The incredible little mare is by Double H Farm’s great stallion Orlando.

While Deusser enjoys success in Europe, McLain Ward has had a great summer showing many of Double H Farm’s talented horses in North America after returning to his partnership with Hunter Harrison this year. Most recently, Ward guided the 14-year-old Hanoverian mare HH Ashley (Acorado x Chasseur) to an exciting victory at HITS-on-the-Hudson in Saugerties, NY. The pair made some very impressive turns in the jump-off to win the $25,000 SmartPak Grand Prix presented by Zoetis. Ward also finish third in the class with HH Fleur.

Ward and HH Carlos Z proved to be a fantastic pair right from the start this winter in Wellington, FL, and fans have not been disappointed. The duo was on fire in Calgary, winning three big classes and finishing second in three more. HH Cannavaro also had his time in the winner’s circle and had great success.

During the North American Tournament, Ward and HH Carlos Z finished second in the $85,000 Progress Energy Cup 1.55m, then jumped to victory later in the week in the $85,000 TD Cup 1.50m winning round competition.

The pair concluded a wonderful summer in Calgary with the Pan American Tournament, where they won the $33,500 Ashcor Technologies Cup 1.55m, then finished second in the following day’s $83,000 Investors Group Cup 1.50m.

“I’m just thrilled with the way this horse is going,” Ward said of the 12-year-old Zangersheide gelding (Chellano Z x Voltaire). “Carlos has always been a horse thought of as the utmost in quality. We were really, I think in the end, very lucky to be able to purchase him in the beginning of this year. I think with a little luck, the next few years are going to be really a lot of fun with this horse because I think he is going to do this week in and week out.”

HH Cannavaro proved his talent this summer as well. He followed up his win in week one by jumping with Ward in the $125,000 Furusiyya FEI Nations Cup™ presented by Scotiabank during the Continental Tournament, where they finished second with team USA. The stallion also finished eighth in the $210,000 ATCO Power Queen Elizabeth II Cup during the North American Tournament.

Ward has only ridden HH Cannavaro, a 10-year-old Holsteiner stallion by Caplan x Caretino, since March, but they have connected quickly. They won the $100,000 Empire State Grand Prix at Old Salem Farm Spring Horse Show in May, and Ward has been teaching the talented horse to be faster in jump-offs.

“He’s a big jumper, and he really likes to take his time,” Ward pointed out. “Just like Sapphire years ago, they have to learn to be a quicker horse. But he really allows you to ride him. He’s older than when I had Sapphire at first; she did the [Olympic] Games at nine. I got him as a 10-year-old. He had a lot of experience and was ready to be pushed a little bit. We’re thrilled with what he’s doing now.”

Ward was happy to be back at Spruce Meadows with a top string of horses under the renewed partnership with Double H Farm. “Spruce Meadows is an incredible event, and the prize money is fantastic. We’re really excited about all our horses, and being back together with Hunter Harrison is very exciting for us,” he confirmed. “He really provides us with some great stock. The results always show. When you have the best horses, it helps.”

Along with his own success, Ward was ringside for several great top finishes with Quentin Judge throughout the summer. Judge is riding better than ever and had a summer that he will never forget.

The highlight of Judge’s summer was his biggest individual win ever in the National Tournament’s $210,000 CNOOC Nexen Cup Derby with HH Dark de la Hart, an 11-year-old Belgian Warmblood stallion (Kashmir van Schuttershof x Nonstop). The pair also went on to finish second in the North American Tournament’s $210,000 Cenovous Energy Classic Derby a few weeks later. Both derbies are an incredible test of endurance and stamina for horse and rider.

During the CNOOC Nexen Cup Derby, Judge and HH Dark de la Hart won the competition with the fastest double clear round in a jump-off against Angel Karolyi (VEN) and Indiana 127. That day, they had each completed the first round course with the best scores of eight faults to result in the tie-breaking round.

In a remarkable turn of events, Judge and Dark ended up in the same two-horse jump-off against Karolyi and Indiana a few weeks later in the Cenovous Energy Classic Derby. The two riders completed rarely seen clear rounds over the difficult derby track to advance to their second head-to-head jump-off. In the 29-year history of the derby competition at Spruce Meadows, Karolyi and Judge were only the 18th and 19th riders to ever go clear over the course out of 615 entries overall.

In the jump-off, the two riders returned in the same order as week one of the Summer Series. This time, Karolyi and Indiana jumped double clear over the short course while Judge and Dark had eight faults. The pair settled for second, but were still enormously thrilled with their success and two incredible derby finishes.

Judge had been working on Dark’s fitness this year and felt his horse was more than ready for the derby the first week out. With the second great finish, the pair solidified their derby talent.

“He’s really fit right now. I had a really good feeling about it for the last couple of weeks,” Judge said after week one. “I had never done a derby on him, but he’s playful and he’s brave, and he really seems like he enjoys what he does. We’re lucky enough at home on our farm to have a slide bank, double liverpools, all those things. I tried to school him out there a couple of weeks ago, and he was pulling me down to everything. I thought if I was looking for a good derby horse, this might be the one.”

HH Dark de la Hart has been “unbelievable” for Judge. The pair won the $35,000 Husky Energy Cup 1.50m in the Meadows on the Green at last year’s ‘Continental’ Tournament, and they have been on two winning Nations Cup teams for the United States. The CNOOC Nexen Cup Derby was Judge’s first International Ring win at Spruce Meadows.

“For sure, it’s my biggest victory. That horse is really special to me,” Judge said.

In addition to their derby talent, Judge and HH Dark de la Hart showed their skill with a fourth place finish in the $35,000 PwC Cup 1.50m during this year’s North American Tournament. They also finished seventh in the $85,000 Husky Energy Classic 1.50m during the Continental Tournament.

Judge had a great summer competing with his other horses for Double H Farm as well, including his newest mount, HH Copin van de Broy. The 12-year-old Belgian Warmblood stallion (Darco x Brownboy) had lots of experience jumping with Germany’s Marcus Ehning, and things went even better than hoped as he and Judge got to know each other.

The pair finished third in the prestigious $210,000 ATCO Power Queen Elizabeth II Cup during the North American Tournament with just four faults in a big jump-off. They also had a fourth place finish in the $400,000 Pan American Cup presented by Rolex on the final day of the summer series, once again qualifying for a difficult jump-off, and jumping double clear. They began the summer with a ninth place finish in the $400,000 RBC Financial Grand Prix presented by Rolex, and improved with each round from there.

The horses and riders of Double H Farm look forward to continuing a wonderful 2014 season around the world. For more information, please visit www.doublehfarm.org.