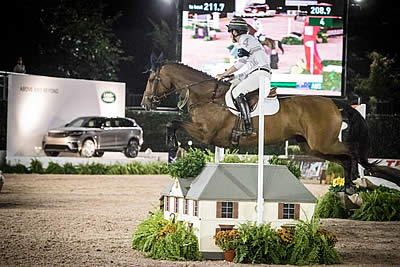 The two-round competition incorporated both show jumping and cross-country elements of the sport, as riders, paired into teams of two, contested an Intermediate level track set by renowned course designer Captain Mark Phillips. The top six teams, based on cumulative time from round one, where brought back for the second and final “money” round for the overall prize fund, which they split based on the final rankings in the second-round speed competition. The competition ran with a faults-converted format, adding two seconds to a team’s overall score per jumping fault. Winning riders Schramm and Wood earned the title of U.S. Open Arena Eventing Champions.

“The inaugural U.S. Open Arena Eventing competition proved to be an exciting thrill ride for the crowd tonight at the Central Park Horse Show,” said Kim McCullough, Vice President of Marketing, Jaguar Land Rover North America. “The final round was a massive crowd-pleaser and a real nail biter as the two-man Australian team galloped across the finish line setting the pace for the rest of the teams to chase down their time.”

Winning East Village team member Dom Schramm [AUS] said: “I didn’t really know what to expect. I was thinking: Central Park – how do you run a horse show with cross-country jumps in the middle of the City? We both just went out there with an open mind and were pumped up and were ready to put it on the line and it paid off.”

Fellow team member Ryan Wood [AUS] commented: “It was pretty amazing – I’ve got to take my hat off to my team mate here Dom [Schramm]. Arena eventing is a great sport as it can all be seen in one setting and it’s pretty exciting. We will both be back here next year – no question!”

Mark Bellissimo, CEO of International Equestrian Group, said: “Eventers are always fun to work with, and they were all excited about this. We got eight of the top ten U.S. riders, and eight or nine Olympians, and we were able to put this together in a way that I think was very interesting, and with a high level of quality.”

Spectators that attended the iconic Central Park location throughout the weekend not only witnessed some of the world’s best event riders in action, top-class Show Jumpers also took to the ring to display their enviable talent in the U.S. Open $216,000 Grand Prix CSI 3* presented by Rolex which took place on Friday evening. In a tense final round, Kent Farrington produced a stunning round aboard Creedance to lift the coveted Grand Prix trophy under the lights of the City that never sleeps.

Speaking after the class, Farrington said: “This is a very special venue, very impressive for the horses. Warming up in the back of the park and walking across in the dark, some of them are a bit star struck so luckily we have a very good course designer. He built a fair course for us and I’m very happy to get out with a win.”

When asked about his decision to donate his winnings to the hurricane relief effort, Farrington remarked: “I am a resident of Florida; my mum lives there and had to relocate to New York to stay with my sister after the hurricane. We were lucky that the hurricane relocated to the other side of Florida but some others weren’t so lucky. I feel very fortunate to be travelling the world and competing for prize money. This event is all about showcasing our sport and I thought it was a great opportunity to do something for people that could use it.”