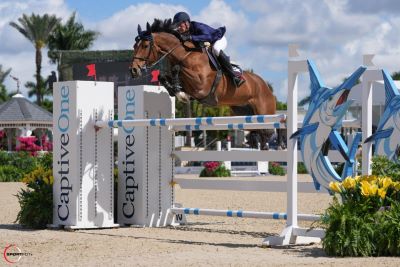 Wellington, FL – February 27, 2022 – Five-star competition at the seventh week of the Winter Equestrian Festival (WEF) culminated on Sunday, February 27, in the $75,000 CaptiveOne Advisors 1.50m Championship Classic CSI5* where Daniel Deusser (GER) secured his second victory of the week. Deusser was also the victor of the $75,000 Adequan ® WEF Challenge Cup Round VII CSI5* with Scuderia 1918 Tobago Z on Thursday of week 7.

A total of 53 pairings put forth an effort in the first-round track of the final five-star course of the week designed by Anthony D’Ambrosio (USA) and Andy Christiansen (ECU). The class was one of many throughout the week to have an impressive turnout of international athletes with 17 different nations represented in the starting field. Early in the class, five entries had already qualified to return for the short track including McLain Ward (USA), Erynn Ballard (CAN), Andrzej Oplatek (POL), Chloe Reid (USA), and Jos Verlooy (BEL). When the final horse on course crossed the timers, an additional 10 duos had managed to navigate their way clear. Two competitors suffered at the fate of a single time fault while one dropped rail kept another 11 out of contention.

Ward kicked off the 15-horse comeback field and took the early lead with The Kasper Group LLC’s Kasper Van Het Hellehof. The top position shifted rapidly after that with multiple riders giving it their all in hopes of taking the win. As the class wound down, Deusser crossed under the bridge with his second jump-off mount, Kiana Van Het Herdershof. Having already gotten a feel for the track with Killer Queen VDM, Deusser precisely pinpointed what areas he needed to correct for the win and emerged victorious with a clean time of 33.36 seconds.

Deusser’s stablemate Petronella Andersson (SWE) produced a top ride for her weekend and slid into second place. She and the Stephex Stables’ 10-year-old KWPN mare Halita O (Eldorado VD Zeshoek x Heartbreaker) clocked in just over a second behind Deusser with a time of 34.87 seconds.

Belgium’s Jos Verlooy and FTS Killossery Konfusion (SIEC Livello x Cruising), a 12-year-old Irish Sport Horse gelding owned by Eurohorse BVBA, finished up with a time of 34.34 seconds over the track to finish in third place.

The International Arena at the Palm Beach International Equestrian Center (PBIEC) closed out the week with the $50,000 Palm Beach Equine Clinic Grand Prix CSI2*. Forty-four horse-and-rider contenders competed for the opportunity to jump-off but only 12 managed to put forth a fault-free round one effort. Late in the order, 29-year-old Maria Costa (USA) put on the gas pedal and piloted her long-time partner Valentino V Z to win the class with a top time of 37.85.

“This might sound crazy, but I was on him for all of 30 seconds when I tried him, and I just knew I had to have him,” described Costa of her 13-year-old Zangersheide stallion (Verdi TN x Converter). “Our relationship is really special to me. I have had him since he was a seven-year-old, and it was certainly a rocky road in the beginning. We stayed super consistent with him. He is the type of horse that really appreciates consistency so about two years in he just kind of decided he liked it. Our bond has gotten to the point where I would comfortably ride into war on him. I always know he has my back and I have his, so I would have to say it is the most special connection I have ever had with a horse. I can’t imagine it ever getting better.”