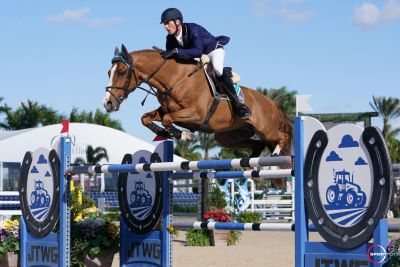 Wellington, FL – March 7, 2021 – Success at the 2021 Winter Equestrian Festival (WEF) continued for Daniel Deusser (GER) as he and Scuderia 1918 Tobago Z, owned by Stephex and Scuderia 1918, put forth a brilliant double-clear effort to be crowned champion of the $214,000 Grand Prix CSIO4*, presented by JTWG, Inc. on Sunday, March 7, in the International Arena at the Palm Beach International Equestrian Center (PBIEC).

A total of 50 entries including six of the top 12 riders in the world, challenged the opening round track set by Steve Stephens (USA) and Nick Granat (USA), with eight pairs qualifying to return for the jump-off. Sixth to contest the subsequent round, Deusser and the 13-year-old Zangersheide stallion by Tangelo Vd Zuuthoeve x Mr Blue executed the track flawlessly, shaving nearly a second off the leading time to finish in 36.45 seconds.

The $37,000 Hermès Under 25 Semi-Final Grand Prix took place in the International Arena on Sunday morning after being postponed from Saturday night due to weather. Forty-six competitors entered the class and eight made it to the jump-off, but Mimi Gochman and Gochman Sport Horses LLC’s Celina BH proved unbeatable.

Riders were tested over a technical first course of 13 fences, including an open water jump, designed by Nick Granat (USA) and Steve Stephens (USA). Gochman, of New York, NY, and Celina BH were twenty-seventh in the order of go and produced the eighth and final jump-off qualifying round. The pair put in a second clear round in the jump-off with a winning time of 31.86 seconds.

“I thought my first round was very smooth, which was the goal,” explained Gochman. “Smooth, stay in the time, no big moves or changes, and I think the plan was to jump clear, obviously. I had a light rub at the second jump, and I think it made Celina and I both pick up a little bit on the rest of the round. She’s so confident at the water, which is really nice that I didn’t have to think about that. She’s so adjustable, so all lengthening and shortening stuff she can do so well.”