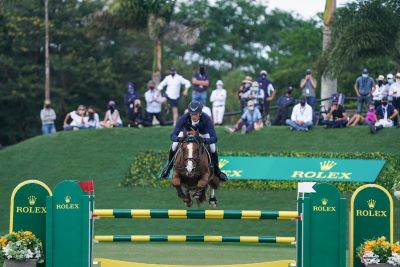 Wellington, FL – March 26, 2021 – Extending an astonishing winning streak at the 2021 Winter Equestrian Festival, World Number Three rider Daniel Deusser (GER) showed once again why he’s one of the best, riding to the top of the $500,000 Rolex Grand Prix CSI5* with Scuderia 1918 Tobago Z, owned by Stephex Stables and Scuderia 1918.

Forty of the best riders in the world took to the grass Derby Field at Equestrian Village on a picture-perfect day for the feature class of the circuit. Eight pairs were clear in the first round to continue to the jump-off.

The first double clear in the jump-off came from Harrie Smolders (NED) and Bingo du Parc, owned by Copernicus Stables LLC. They set the time to beat at 36.74 seconds, which would hold up for third place.

Coming in just two-tenths of a second faster, Daniel Bluman (ISR) lowered the leading time to 36.54 seconds riding Gemma W, owned by Blue Star Investments and Over the Top Stables. Their fault-free performance would land them in second place.

With the fastest time of the jump-off in 34.94 seconds, two-time Olympic team gold medalist McLain Ward (USA) was by far the speediest with the Beechwood Stables, LLC-owned entry Contagious, but a costly rail in the ‘b’ element of the Rolex double combination dropped him to fourth place.

As the last to go in the jump-off, Deusser had the advantage of knowing the time to beat and used it to his advantage, coming in just under the winning time in 36.40 seconds.

The day commenced with yet another two-star victory in the Global International Arena at Equestrian Village for Gabriela Reutter (CHI) and Atticus Diamant, this time in the $6,000 CabanaCoast 1.40m Jumpers CSI2*. Reutter was victorious in Thursday’s opening CSI2* speed class.

Reutter and the 2009 Selle Français gelding by Diamant De Semilly x Vas Y Donc Longane owned by Lumiere Horses Inc. bested a 10-horse-and-rider line-up to produce the fastest of five double-clear rounds. Clearing the jump-off timers in 26.75 seconds, Reutter explained that her plan was to approach the entire class as if it was a speed round.

“We worked on our pace in the warm-up,” she explained, “which is what we did last time as well. We didn’t jump as much because he knows his job. When we went in there, I tried to teach the entire track as a speed course, just because that seems to keep him thinking and on his toes, and I think he likes that, to be tested. I wanted to keep that momentum and the element of surprise, and it keeps me in the moment and really thinking about what our next move is.”