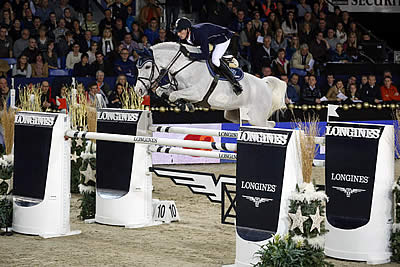 Mechelen (BEL), 30 December 2013 – Germany’s Daniel Deusser produced a fabulous performance from Cornet d’Amour to win the sixth leg of the Longines FEI World Cup Jumping 2013/2014 Western European League series at Mechelen, Belgium today.  From a starting field of 40, only four horse-and-rider combinations found the key to Lucien Somers’ tough first-round track. But the 32-year-old rider and his graceful grey gelding were smooth as silk when earning their spot in the jump-off, and they went on to clinch victory in the finest style with a thrilling run against the clock.

Runner-up was Sweden’s Jens Fredricson with his veteran partner, Lunatic, while Spain’s Pilar Cordon finished third with Nuage Bleu.  Last to go against the clock, 2000 Olympic champion Jeroen Dubbeldam from The Netherlands retired after lowering a fence with Zenith, but this nine-year-old gelding is clearly one for the future.  Australia’s Edwina Tops-Alexander did well to play the percentage game with Ego van Orti whose single first-round time penalty was good enough for fifth place ahead of the fastest of the four-faulters – Great Britain’s Joe Clee and Diablesse de Muze.

Today’s competition was one in which every inch of the arena had to be ridden to perfection in order to be successful.  “I expected more clears, but it was a long, tough course and the time was tight.  It was the kind of course where you had to totally concentrate from the first fence to the very last,” said the winning rider this evening.

The arena at the Nekkerhalle in Mechelen is long and narrow, thus presenting a particular challenge to both course designers and horse-and-rider combinations alike.

Starting out over an oxer, several horses had already lost their concentration by the time they took the bending line to the vertical at fence two, while even more lowered the oxer at fence three after the turn-back there.  Another vertical at four followed by an oxer at five and then a right-handed turn to the vertical at six led to the influential line from the oxer at seven to the double – vertical to oxer – at fence eight.  Every fence took its toll, and the following oxer at nine was followed by the triple combination before another right-handed swing to the last three fences.

The triple-bar at eleven put many horses on the forehand, so riders often had a handful of horse coming down to the penultimate oxer along the ringside. And with five short strides to the final planks, control of pace and balance was critical at the very end.

It took quite a while for the first clear to be recorded by Fredricson and his 15-year-old gelding whose success, when eleventh to go, was greeted by a great cheer from the big crowd. And then, as so often happens, another followed just two horses later when Spain’s Pilar Cordon and Nuage Bleu also got it all just right.  However there was a long wait for the final two to join them on the jump-off start-list, Deusser and Cornet d’Amour looking in a class of their own with their foot-perfect round when fourth-last into the ring, and Dubbeldam most impressively steering Zenith home without incident when second-last to go.

The 72-seconds time-allowed was all that denied Australia’s Edwina Tops-Alexander and Ego van Orti the opportunity to contest for maximum points, but her fifth place finish has boosted her points tally to 47 and she is now comfortably qualified for the Longines FEI World Cup Jumping Final next April.  She lies third on the Western European League table after today’s result, four points behind Olympic champion Steve Guerdat from Switzerland in runner-up spot and just five points behind Longines No. 1 rider Britain’s Scott Brash who remains at the head of affairs going into the next leg in Leipzig, Germany in three weeks’ time.

Fredricson led the way against the clock today and really threw down the gauntlet when galloping through the finish clear in 36.43 seconds.  Cordon also left the new seven-fence course intact to slot temporarily into runner-up spot when just over a second slower, and Deusser admitted afterwards that he wasn’t sure he could better the target set by the super-competitive Swedish partnership.

“When you have only four clear you think, well that’s not so bad. I had a good feeling about just four, but Jens was very fast and clear.  I saw him on the screen and my alarm button was already on. I thought, Oh no! Now it’s going to be really hard work to beat that! But I know my horse and he can do fantastic things.  I was lucky on the double vertical and I knew my horse could jump the combination very fast. There was a long run to the double of verticals and I knew he could do one stride less to that, so I think that’s where we picked up the time,” he later explained.

Shaving more than a second off that posted by the Swedish pair he crossed the line in 35.66 seconds.  And when Dubbeldam’s up-and-coming prospect left one on the floor, the Dutch rider sensibly retired to finish fourth.

Coming into his prime

The German winner talked about his eye-catching gelding son of the great Cornet Obolensky who, at 10 years of age, is still only coming into his prime. “I’ve been riding Cornet d’Amour since June 2012. I took a couple of months to get to know him before we went to our first big show together in Calgary (CAN) where he jumped double-clear in the Nations Cup. But then he got an injury in November so we had to stop for two months, and in the end the break was maybe good for him because he came back out in February to win the Grand Prix at Wellington in Florida.  We’ve had a great year in 2013 including finishing fourth in the Grand Prix of Aachen!” the rider happily pointed out.  The elegant pair also claimed the German Championship title at Balve this year before taking team silver and fifth place individually at the PSI FEI European Jumping Championships in Herning, Denmark in August.

Describing Cornet d’Amour, Deusser said, “He likes to present himself in front of the crowd.  In the warm-up he is totally relaxed, but he loves to know that people are watching him and when he comes into the arena he always grows a little – he likes to show off!”  He was particularly pleased about today’s win because it was on home ground. He lives in Mechelen with his girlfriend Caroline Wauters who is part of the organising team for the Belgian fixture and a daughter of the late Belgian jumping star Eric Wauters in whose memory the hugely popular annual fixture is staged.

Deusser recognised today’s victory as an important watershed in his career and said it has influenced his plans for 2014. “At the beginning it was not my goal to go to every World Cup show and try to qualify for the Final, but my other horse has grown so well in the last few months and this horse is in great form. So now I must consider whether I should try to get to the Final.  I’m planning to go to the US in February – this has always been part of my plan.  We went last year and it worked out really well,” he explained.

And he commented on how lucky he is to have the horse with which he won today. “Cornet d’Amour is jointly owned by Stephan Conter of Stephex Stables and Hunter Harrison from America.  Stephex Stables is a very big sales centre for horses so it is great that, thanks to these two people, I now have two great horses for myself to ride so I can really make a plan and get to the good shows.  It costs a lot to have horses on the road, and grooms and show expenses so, once in a while, it is great to get to keep some good ones!” he said appreciatively.

Today’s result has moved Deusser into ninth place on the Western European League leaderboard from which the top 18 will qualify for the Longines FEI World Cup Jumping 2013/2014 in April.  The next leg of the series takes place in Leipzig, Germany on January 19.

The next leg takes place in Leipzig, Germany on Sunday 19 January 2014.  For all information on the Germany fixture, go to website www.partner-pferd.de/de or contact Press Officer Andreas Kerstan, Email andreas.kerstan@comtainment.de, Tel +49 177 7532 624.

From a starting field of 40, just four horse-and-rider combinations jumped clear in the first round.

Australia’s Edwina Tops-Alexander finished fourth with Ego van Orti when collecting just a single time fault in the opening round.

A total of 10 horse-and-rider combinations had a single fence down in round one.

5 riders opted to retire in the first round.

Norway’s Victoria Gulliksen was eliminated in the first round when riding a circle following a refusal at the second element of the double at fence 8.

The annual Mechelen fixture is dedicated to the memory of the late Belgian jumping star, Eric Wauters.

Today’s winning rider, Germany’s Daniel Deusser, is based at Mechelen with his girlfriend Caroline Wauters who is a daughter of the late Eric Wauters and a key member of the Mechelen Organising Committee.

Winning rider Daniel Deusser (GER): “My girlfriend, Caroline Wauters, is part of the organisation here, and we live together in Mechelen so this is my home show!”

Peter Bollen, Mechelen Show Director: “We are very happy with the show this year.  The riders are the ones that create a fantastic show and I would like to thank them all very much. It was last year, during the show, that we heard Longines would be the new sponsors of the FEI World Cup Jumping series. The teams onsite are very professional.  Most importantly, the value of the Finals this year will be higher and more riders will want to participate with the prizemoney involved.  They have increased it significantly – well done to them for taking that step.  The Longines FEI World Cup product now is extremely strong, and I want to thank Longines for their fantastic support.”