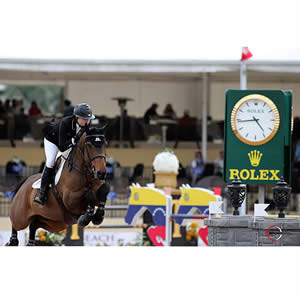 In what was the largest starting field in the history of the WEF Challenge Cup, 116 horses attempted the first round track set by 2012 London Olympic course designer Bob Ellis.  A total of 30 were successful, including the three Canadian entries of Foster riding Victor, Eric Lamaze aboard Zigali P S and Yann Candele with Showgirl.

All three would repeat their faultless form in the jump-off, but Foster showed the men how it was done, putting the pedal to the metal and slicing all the turns to stop the clock in 44.04 seconds.  Twelve more horses would follow, with only 2012 Olympic team gold medalist Ben Maher of Great Britain posting a faster time of 43.44 to win Section A with Urico, and putting Foster in the top spot in Section B.

“He is really confident and comfortable here,” said Foster of Victor, her partner of the past four seasons and her 2012 Olympic mount.  “He’s really fast, and now it’s getting fun because I know him so well and I can go really fast with him!  Once you get on a roll, it seems like you gain confidence and you’re prepared to take some risks and the horses rise to the occasion.”

Victor is a 12-year-old Dutch Warmblood gelding (Elmshorn x Grandeur) owned by the Ziegler family’s Artisan Farms.  Artisan Farms also owns Lamaze’s mount, Zigali P S, who placed third in Section A, and are part of the Watermark Group that owns Candele’s mount, Showgirl, who was fourth in Section B.

“I have to give all the credit to Eric,” explained Foster, 29, following her victory.  “Since last September, I don’t jump Victor at home anymore; only Eric rides him.  He does all the work and I get all the glory!”

Foster has also been enjoying incredible success with her entire string of competition mounts, including the up-and-coming horses Melody des Hayettes Z and Brighton, all owned by Artisan Farms.

“I have a super group of horses and I have to thank Andy and Carlene Ziegler and Artisan Farms,” said Foster, who is based with Artisan Farms in Wellington, Florida, and Vrasene, Belgium.  “They are unbelievable owners, and I am really happy that their support is paying off!”

Based on their success in the $125,000 WEF Challenge Cup Round V, Foster, Lamaze and Candele are all qualified for Saturday night’s $370,000 CSI5*-W World Cup Grand Prix, presented by Rolex.