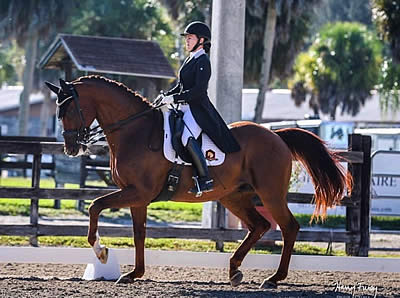 For horse lovers, Dressage on the First Coast, December 1-2, brought more than 50 skilled riders and horses together to compete, delivering performances that suggested future international champions may be in their midst.

Among the top riders that weekend was Germany’s Franziska Seidl, who posted one of the highest scores of the show (74.750%) while winning the 2018 FEI Freestyle, as well as the FEI Grand Prix (68.913%), on her 16.3-hand Brandenburg gelding, Romano K. Seidl then won the 2017 FEI Grand Prix and Freestyle tests, riding her 16.3-hand bay KWPN gelding, Sigalia.

“We had an exciting but wet show in Jacksonville,” laughed Seidl. “Romano won his classes and was Reserve Champion in their level. Sigalia is still very fit (almost too fit) and won his Grand Prix. Overall, it was a special weekend because my parents, who were visiting from Switzerland, enjoyed being with us in Jax!”

Amy Speck-Kern from Loxahatchee, FL scored a new personal best, earning her final score for her USDF Gold Medal while riding her 16.3-hand, chestnut KWPN gelding Amadeus (Welt Hit X Fleming) to reserve honors in the 2018 FEI Grand Prix. “We had a great weekend at Dressage on the First Coast,” she added. “It’s been quite the journey from the first time Gwen Poulin and I saw him in Holland as a three-year-old to becoming a real Grand Prix horse!”

Show manager Carlie Evans said, “There were nice scores all around and lots of riders earning their first qualifiers of the show season. The Jacksonville Equestrian Center is a great place for a show. It has a great arena and good footing. Since it rained that weekend, it was nice to have the indoor arena, and covered warm-up rings.”

December 7-9, the Jacksonville Equestrian Center bow-wowed visitors with more than 100 dogs competing over three days in the USDAA Pals and Paws Dog Agility Club Show, one of four such trials held annually for canine sport enthusiasts from the Jacksonville, Orange Park, and surrounding areas. The US Dog Agility Association (USDAA) was formed in 1986 and serves members in the US and internationally, and sets the rules and standards that ensure that all competitions (such as those held at Jacksonville Equestrian Center) abide by the same rules.

“We have been using the Jacksonville Equestrian Center for several years and love the facility. It provides protection for our dogs, our competitors and spectators from wind, rain, and sun,” said Pals and Paws organizers, who added that the December show marked the 25th anniversary of the club hosting USDAA trials, and marked the retirement of a local canine competitor and one of the top Belgian Tervuren dogs in USDAA history.

Demonstrating their own degree of agility were the horses and riders competing December 8 in the Dixon Arena at the Jacksonville Equestrian Center in the third and final Holmes Ranch Jacksonville All Breed Open Horse Show of the season. The series, presented in September, October, and December by the Lawtey, Florida-based natural horsemanship and foundation training facility, offers more than 50 classes at each show, with year-end awards in halter, hunter, western, gaited, and trail divisions.

“This is the kind of great facility that helps horse shows grow. We’ve seen firsthand the popularity the show has gained since adding jumping classes,” said All Breed Open Show organizer, Ruth Holmes, who also credited good footing, and the all-weather accessibility of the Jacksonville Equestrian Center indoor arena and warm-up rings, with encouraging the show to expand and offer more over fences classes, including a Hunter Hack division for beginners (one jump) through seasoned hunters (four jumps).