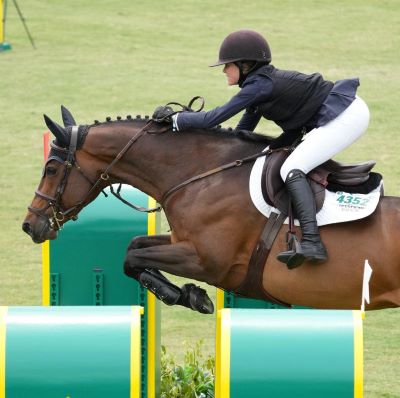 Wellington, FL – April 1, 2022 – The third day of international competition on Friday, April 1, during the final Rolex-sponsored week of the 2022 Winter Equestrian Festival (WEF), closed out with Grace Debney (GBR) winning her first-ever five-star class in the $37,000 Bainbridge Companies 1.45m CSI5*.

Fourteen nations were represented in the 50-horse lineup of the five-star class. Course designer Guilherme Jorge (BRA) built a track worthy of the day’s main event with a single-round speed challenge to be completed under an efficient time of 76 seconds. Daniel Coyle (IRL) and his top mount, Farona, took the early lead in the speed class as he stopped the clock in 55.30 seconds with Ariel Grange’s 12-year-old KWPN mare (Baltic VDL x Lux Z). The pair held the headline position until nearly the end, but Debney made it clear she did not come to take second.

Debney and her long-time partner Zarina De Vidau, a horse she has had since acquiring her to do the junior jumpers, put complete faith in one another and became the only combination to lower the time on the scoreboard below 55 seconds. By leaving several strides out across the course and relying on the trust they have built, Debney and the Temple Equestrian LLC’s 11-year-old CDE mare (Diamant De Semilly) shook up the competition with a final time of 54.97 seconds.

Jorge’s course for the $37,000 CabanaCoast 1.45m Qualifier CSI2* left only 13 of the original 76 entries eligible for the class’s short course. The tight time allowed of 71 seconds played a factor for 10 riders, while five more fell victim to a downed rail. Riders from the U.S., Germany, Canada, Ireland, and Great Britain made up the jump-off.

Trailblazer Lacey Gilbertson (USA) was the front runner as the final adjustments were made and set the time to beat with a blazing fast double-clear performance of 38.58 seconds. Samuel Hutton (GBR) immediately followed with another clear round but settled into the temporary second place with a slightly slower time. The remainder of the competitors gave it their best shot with all but five going fault-free, but Gilbertson and Seabrook LLC’s 12-year-old BWP mare Karlin Van’t Vennehof (Fantomas De Muze x Quasimodo Van De Molendreef) held tight to the top position throughout the entirety of the second round.