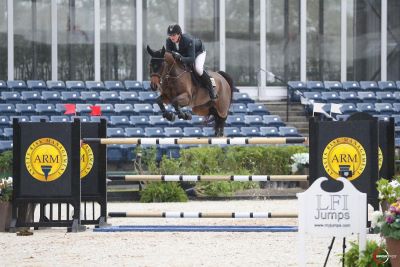 Wellington, FL – Nov. 19, 2021 – A wet second day of the ESP Pre-Charity CSI3* couldn’t dampen the competition that was seen in the $37,000 Assets Risk Management 1.50m CSI3* at the Palm Beach International Equestrian Center. Course designer Héctor Loyola (PUR) set an apt challenge for the class, with six of the 23 entries advancing to the jump-off, which trimmed the number of double-clear pairs down to only three. Jumping to the top of the leaderboard by just six-hundredths of a second, David O’Brien (IRL) and Chansonette Farm LLC’s El Balou OLD wrapped the contest as the class victors, a promising win ahead of Sunday’s $137,000 NoltrexVet® Grand Prix CSI3* and a super result for O’Brien’s newly-founded stables.

Earlier in the day, the $10,000 Bainbridge Companies 1.40m Stake showcased the efforts of 35 horse-and-rider partnerships. Of the initial field of entries, 12 duos advanced to the jump-off to vie for the top prize, whittled down further to just five double-clear pairs by the end of the class. Midway through the jump-off, Ali Wolff (USA) and her own Footloose HX set a quick standard without faults in 41.56 seconds, which no other pairs were able to surpass, to solidify the early frontrunners as the class victors.

Hunters were in the spotlight on Friday during the ESP Pre-Charity CSI3* at the Palm Beach International Equestrian Center. Held in the E. R. Mische Grand Hunter Ring, the $2,500 USHJA National Hunter Derby saw contenders compete over two rounds of riding, with one duo standing out as the clear victors. With two scores that hit the 90-point benchmark, Kelly Soleau-Millar of Wellington, FL and Millar Equine Sales’ Abel Crawford ran away with the win to clinch the lead spot in the lap of honor.

The classic round of the class concluded with Soleau-Millar and Abel Crawford in the lead with a score of 90, giving them a small safety net over the pair that was sitting in the next-best spot, Molly Sewell of Wellington, FL and MTM Farm’s Konig Der Loewen, who had earned 87 points. Back in the ring as the final challengers, Soleau-Millar and Abel Crawford needed a handy score of 84 to clinch the win, and they far surpassed that with their exemplary round, earning a base score of 90 plus four handy points to add 94 points to their initial tally.