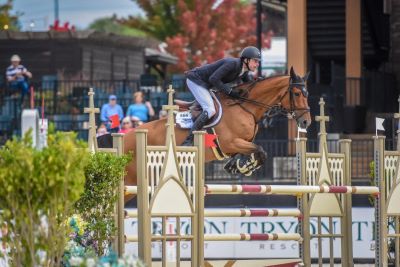 Blake called the short-course contest a “nice, competitive jump off” that saw four pairs return to Tryon Stadium after eight horses initially toured the Skip Bailey (Wellington, FL) track. Blake and the 2008 Dutch Warmblood gelding (Zento x Selien) owned by Pine Hollow Farm used their place in the order of go to their advantage. “I was lucky enough to be last to go on the horse who won,” Blake reflected. “On [Keoki], I was just planning to give him a jump around for his fitness, so I gave him a nice round for the jump off. I knew the other two would be pretty quick, and then I was last, so I knew exactly what to do.”

The plan was simple: take advantage of Dy Zento’s massive stride and leave out a step in the first line. From there, it all fell into place for the duo, Blake explained. “I decided to do one less stride up the first line. My horse is a bigger horse, so I thought that if I carried on with enough pace the rest of the way, that would be enough to do it.”

After aiming Dy Zento at this class in particular, Blake was thrilled that his short trip to Tryon was successful. “It’s been good here. All the horses are jumping great. Obviously, we’re happy we won today, since that was the main thing we came here to do. We’re happy with that!”