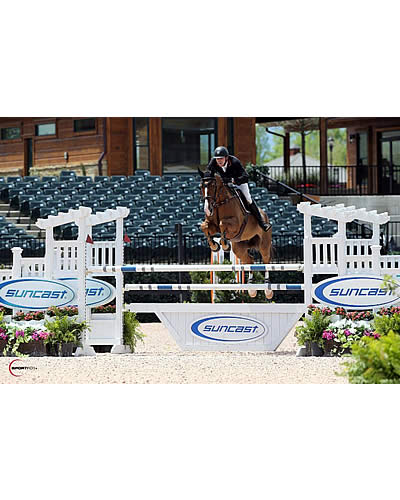 Mill Spring, NC – May 27, 2015 – David Blake (IRL) and Pine Hollow Farm’s Binkie kicked off Tryon Spring 7 with a win in the $34,000 Suncast® FEI Tryon Welcome at Tryon International Equestrian Center (TIEC), the first FEI class to ever be offered at the venue. FEI CSI 3* classes, alongside national level hunter and jumper competition, continue at TIEC throughout the week with the highlight, the $127,000 Kingsland Equestrian Grand Prix CSI3* on Saturday, May 30, beginning at 7pm. TIEC will continue to host the Tryon Spring Series through its conclusion on June 7.

Blake and Binkie were the second to last pair to test the course in the jump-off order, following the fastest round laid down by Sharn Wordley (NZL) and Sky Group’s Casper, which put the pressure on Blake for a quicker clear round.

“I didn’t get to see the rides, but I knew Jonathan (McCrea) had done five (strides) up the middle and that Sharn had gone in and beaten that. I knew that I wanted to stick to my plan and needed to ride everything correctly,” said Blake. “I knew I could get just under that without feeling like I was running him around too quickly.”

The duo also rode one of the fastest first rounds of the class, finishing the track in 72.37 seconds to move to the jump-off. The competition was stiff as 37 combinations vied for the top prize in the leadoff FEI class of the week. The course, designed by Anthony D’Ambrosio (USA), saw 12 pairs move forward to the jump-off.

“I knew when I looked at the course that it would suit my guy because there were three places that I could leave out a stride, so I knew I could be quick using the length of his stride without going really fast,” explained Blake as he talked about his plan going into the jump-off. “I just wanted to be smooth and leave out those strides where I could and maybe it would get me close enough to win it.”

The duo has had an incredibly successful run so far during their time at TIEC, Pine Hollow Farm’s summer home base for competition. Binkie, a 2006 Dutch Warmblood gelding (Larino x Whisper B), haven’t placed outside of the top ten under Blake’s guidance at TIEC so far this season.

“We’ve only had him for about four months and he’s placed in every class so far since we’ve had him here and then he won today. This is also the first show we’ve really stepped him up at,” he said. “He’s just nine years old so I think he’s really a great horse and we’re very excited about him and his future.”

Blake and Binkie will look towards the $127,000 Kingsland Equestrian Grand Prix on Saturday night, attempting to capitalize on the gelding’s consistency in the George H. Morris Stadium so far this season. As the first real test of the week, Blake is confident that Binkie will add another strong performance to their already impressive list of finishes in 2015.

“We’ll shift the focus to the main Grand Prix class on Saturday. We’ll take it easy now in preparation for that. He jumped last week also, so I want to make sure that he’s fresh for Saturday and feeling rested,” commented Blake. “Hopefully we’ll get another good result there too. He’s jumping well and the courses have really suited him.”

Tryon Spring 7 will highlight several FEI CSI 3* classes including the $34,000 FEI Tryon Speed Stake tomorrow beginning at 12pm and the $127,000 Kingsland Grand Prix to be held on Saturday, May 30, with competition starting at 7pm. The $25,000 Grand Prix, a national level class, will conclude competition on Sunday, May 31, at 2:15pm. All FEI classes will be held in the George H. Morris Stadium on TIEC grounds.

For more information on TIEC and a schedule of current events, please visit www.tryon.com. Please “Like” the TIEC Facebook page at www.facebook.com/tryonresort to be eligible for various contests and promotions.