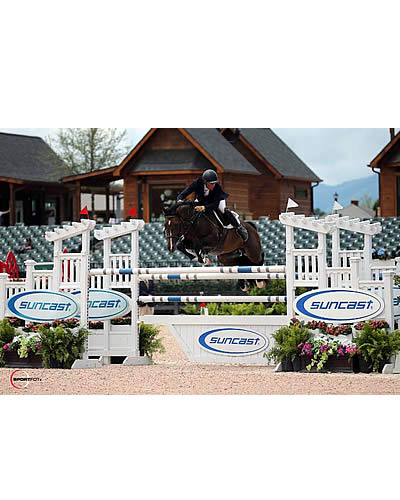 Beisel and Ammeretto collected their first victory at TIEC and the second big win of their 2015 season, along with top finishes in Ocala and Kentucky. “He’s had a great year this year. This is the second big class we’ve won and also have had several top placings in some pretty big classes,” said Beisel “I think I’ve been playing it too conservative with him. He’s a little guy and he likes to be able to get a good pace going and today I decided to let him go. If he’s not feeling challenged, he gets a little bit bored. He absolutely loves the challenge.”

The class saw 10 pairs move forward to the jump-off, but Beisel and Ammeretto laid down the fastest two rounds of the class, both in the first round and jump-off, finishing their first go around the course in 75.11 seconds and their jump-off in 29.465 seconds. The track proved difficult for a number of riders as several pairs accumulated time faults.

“I thought the course looked really nice. He’s got a great jump over the water, and I felt like that could save us some time. Plenty of people were having time faults so that’s where I was concerned,” said Beisel. “I got lucky because he rubbed both Fence 6 and 7 but he kept them up and after that he didn’t touch anything for the rest of the round.”

The spirited 2005 Dutch Warmblood stallion packs a big punch considering his relatively small size. Under Beisel’s guidance for nearly his entire life, Ammeretto’s personality shines in the ring and there are big plans on the horizon according to Beisel.

“I’ve been riding him for seven years. We started him when he was three years old and have had him ever since. I’m really looking forward to putting some consistent performances in this year,” he said. “I would love to look at going to World Cup Finals at some point or qualifying for some team participation down the road. That would be the ultimate goal.”

TIEC has served as a great destination for Beisel and his team, as taking advantage of FEI classes offered in the United States has been a high priority in their seasonal schedule. Beisel is entered in the $210,000 Tryon Grand Prix CSI 4* for the Governor’s Cup on Saturday, June 6, with both Ammeretto and his other ride, Call Me Hannes.

“We have certainly enjoyed it here. It is a really great facility, and we’ve been super impressed with everything since we’ve been here. I want to thank Mark [Bellissimo] for bringing these FEI ranking classes here. That is the main reason why we’re here and I’m already looking forward to coming back,” he remarked.

Competition at TIEC continues tomorrow with the $34,000 FEI 1.45m Speed Stake beginning at 12pm. The $210,000 Tryon Grand Prix CSI 4* for the Governor’s Cup will held on Saturday, June 6, in conjunction with The Festival of the Carolinas Craft Beer Festival and the naming of 14 local charities to participate in this year’s Great Charity Challenge of the Carolinas (GCC) to be held in October. Grammy-winning performer Lee Greenwood will also sing his hit “God Bless The U.S.A.” alongside a guest appearance by the Special Forces Parachute Team presenting a four-person tandem jump from 8,000 feet while landing with a 20-foot by 40-foot American flag in the George H. Morris Stadium.

For more information on TIEC and full results, please visit www.tryon.com. Please “Like” the TIEC Facebook page at www.facebook.com/tryonresort to be eligible for various contests and promotions.