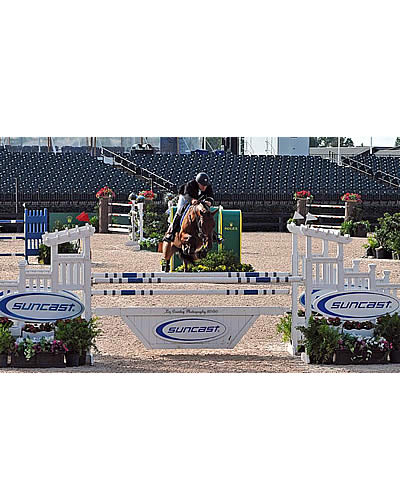 Mill Spring, NC – July 16, 2015 – In an exciting finish in the $34,000 Suncast® 1.45m FEI Welcome at Tryon International Equestrian Center (TIEC), Darragh Kerins (IRL) and Thunder D’Amaury stole the show, finishing with a double-clean effort to take the class with a time of 45.227 seconds. Kimberly Prince (USA) and RMF Bella Baloubet collected another second-place finish, stopping the timers just short of Kerins in 45.336 seconds. Candice King (USA) and Valinski S also made a strong run toward the top of the leaderboard, but finished in 45.543 seconds for third. Competition at TIEC continues with the Tryon Summer Series through Sunday, July 19.

Kerins and the 2007 Selle Francais gelding (Quidam De Revel x Fille D Espoir) mastered the track set by Manuel Esparza (MEX), completing one of five double-clear rounds of the morning. The gelding has recently stepped up to the FEI level with Kerins in the irons.

“This feels great. It was a quite technical course and after I watched the first few runs through the track, the time allowed was very tight,” said Kerins. “I thought it might be an issue for us because he is so green, but I’ve been here for three weeks and he’s only progressed. He felt very confident in the ring today.”

The duo laid down a near perfect round in their first effort around the course, which pushed them into the jump-off portion of the class. Going late in the order, Kerins secured the win as the second-to-last horse on course.

“In the first round today everything just came up right and rode perfectly. I just felt with it today and he was perfect. He’s only eight, but I truly believe that he’s the best horse I’ve ever had and I’ve had some very special horses,” he explained. “He just has everything already at such a young age and sometimes I wonder if I’m asking too much too early, but he handles everything with such confidence.”

“The ability is there and it’s been great to come here for three weeks and consecutively jump the big tracks with him to get into the groove of what’s to come,” he commented. “I really expect big things from him next year and this was perfect preparation for what we’re looking to do. I think he’s just grown in this ring which is great for what we’d like him to do in the future.”

Thunder D’Amaury was poised and calm in the ring, which allowed Kerins to ask for a faster and more efficient round, testing the clock and the four other jump-off challengers.

“The jump-off was relatively small and like I said I don’t want to push him too hard, but he felt so great in the first round that I decided I would go for it and he handled it exactly how I expected he would,” added Kerins. “We stepped it into another gear to see what we had and he didn’t disappoint. He keeps producing which is just great.”

The gelding has only been stateside for six months, but has catapulted himself to the top of Kerins’ string. Campaigning through the 1.30m classes during the winter season, the duo’s recent three-week stay at TIEC has served as some of their first FEI competitions together.

“He was a stallion when we bought him and we gelded him over in Europe and left him there to mature a bit before bringing him over here to start competing in the U.S.” he noted. “We played around at the smaller heights to get him comfortable and are now trying to combine what he learned in Florida and translate that to bigger classes.”

After concluding their time at TIEC, Kerins and team will head north to several competitions in the Northeast before heading back to TIEC for the Fall Series (Sept 16 – Oct 25).

“This place is absolutely amazing and I have been so thrilled to be here. The atmosphere is amazing and it’s something that my horses won’t experience anywhere else,” he said. “We’re looking forward to coming back this fall. The direction they’re going with this venue is unbelievable. I wanted to come see it myself after hearing all of the talk and what they’re doing here is just brilliant.”

The duo collected two firsts and two seconds, including a second in the under saddle portion of the class to take home the tricolor ribbon after a successful morning. The flashy dapple-grey gelding has impeccable form over fences and seems to be a true contender for the First Year Division next year.

Gavin Moylan and Kinematic, who finished in reserve in the division, collected two firsts, one in an over fences class and also picked up a first place in the under saddle class. The duo also placed sixth and seventh, respectively, in the other two over fences classes.

FEI competition continues at TIEC this week on Saturday, July 18, with the $127,000 Grand Prix with gates opening at 6pm and competition beginning at 8pm. For more information on TIEC and for a full list of results, visit www.tryon.com. Please “Like” the TIEC Facebook page at https://www.facebook.com/pages/Tryon-International-Equestrian-Center to be eligible for various contests and promotions.