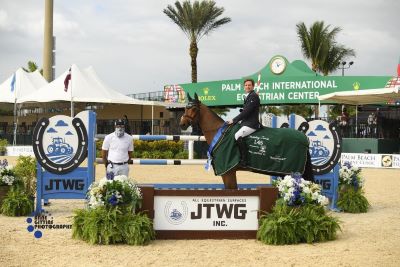 “I think in all of the classes I’ve jumped him in, he’s had one jump down [total],” commented Kenny of Belo Horizonte, a 2008 Holsteiner gelding by Baloubet du Rouet x Clearway. “He’s extremely careful. I was just happy I rode well today and the horse went great so it was a nice result.”

Course designer Loyola designed a track including 12 elements up to 1.45m in height and a time-allowed of 85 seconds. The course saw 19 clear rounds, with McLain Ward (USA) and Catoki (Catoki x Cartello B) leading the majority of the class. Ward and Catoki, owned by Marilla Van Beuren, Bob Russell, and Ward, were hot off a win in the $37,000 Vobev Holiday II Opener CSI4* on Thursday and looking to add another win to their list for the week. The pair ultimately finished in third place after stopping the clock fault-free in 64.60 seconds. Another frequent winner, Kent Farrington (USA) and Take the High Road, LLC’s Austria 2 (Casall x Corrado I), claimed second place with a quick time of 63.04 seconds, just fractions of a second behind Kenny and Belo Horizonte, who rode near the end of the starting list with a winning time of 62.94 seconds.

“I’ll build him up a little bit more during circuit. Maybe jump the 1.50m classes and maybe some of the three-star grand prix classes, then see how that goes,” Kenny said regarding his goals for Belo Horizonte. “He can do jump-offs – he won the National Grand Prix last week with a jump off – and this week he won the speed. I think he’s just a really, really talented horse.”

“It’s always nice to win here, and it’s nice to be back here. I like being in one place, and I’m happy to be starting out on a good note,” described Kenny of being back at PBIEC.